Oct 8, 2014 6:36 PM PHT
Katerina Francisco
Facebook Twitter Copy URL
Copied
The Philippines launch an initiative to open government programs and policy making to children's participation since it's their future that is at stake 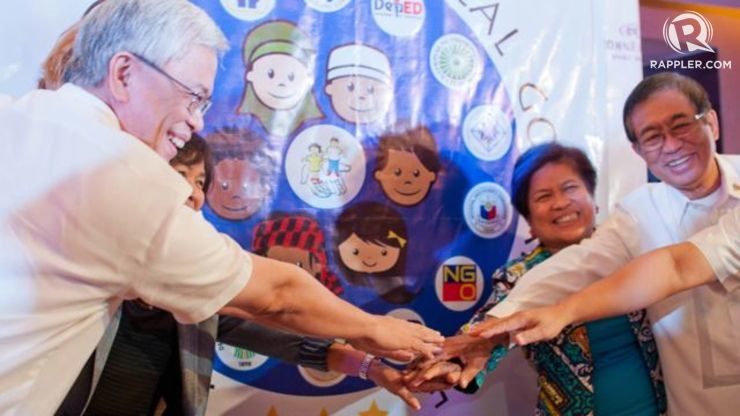 MANILA, Philippines – When he was a kid, Education Secretary Armin Luistro had been told it was not a child’s place to join in conversations among his elders.

So the young Luistro simply listened, and talked in whispers among his peers.

(When we were little, we just listened, and discussed in whispers under the table the funny things the elders did.)

But now, Luistro knows better. Children, he said, should be given a voice – especially if it’s in key decisions that would affect their future and development in society.

On Wednesday, October 8, government officials launched an initiative to coordinate with local leaders in implementing programs and services that would make for a child-friendly Philippines.

A central component in the initiative is involving children in the process of identifying and implementing projects that would benefit them.

(Rizal probably did not intend that to mean children should grow up first, and then be expected to provide solutions to the country’s problems when they are adults.)

Twenty-five years ago, children’s right to participate was formally recognized by countries around the world through the ratification of the Convention on the Rights of the Child (CRC).

The landmark convention resolved to protect the rights of children, recognizing them as human beings possessing rights equal to adults, and discarding the view that they are helpless objects of charity.

The Philippine initiative launched on Wednesday follows the provision set down in Article 12 of the Convention, which stresses children’s rights to participate in discussions and have their opinions taken into account.

In Filipino society, children are seldom let in on conversations among their elders, nor consulted in key decision-making processes. But this is a mindset that needs to change, Luistro said.

Fittingly, Wednesday’s program launch was opened by a child.

In his welcome message, 12-year-old John Emil Palacio, himself an advocate for children’s rights, said it is important for adults to recognize that children need to have a say.

(What is true child participation? It is children’s involvement in the decision-making process in issues that are relevant to us, where children can voice their opinions and have them taken seriously by adults.)

By respecting children’s views, Palacio said, they are given a boost in self-confidence.

The Philippines is taking concrete steps to abide by its commitment to the Convention, said Patricia Luna, officer-in-charge Executive Director of the Council for the Welfare of Children (CWC).

Part of this commitment involves strengthening different advocacies and programs to protect children, who are still vulnerable to risks of abuse, neglect, and exploitation.

While children are expected to play a role in this initiative, Luistro said, government should also put children’s welfare at the center of its decision-making process.

(In policy making, the first question should be: is this okay for the children? If it does not benefit the children, there is a problem.) – Rappler.com