Oct 9, 2014 8:48 PM PHT
Buena Bernal
Facebook Twitter Copy URL
Copied
A lawyer from the Anti-Money Laundering Council testifies before the anti-graft court that the unit noted suspicious transactions and red flags in the cash outflow and inflow of the senator and members of his family 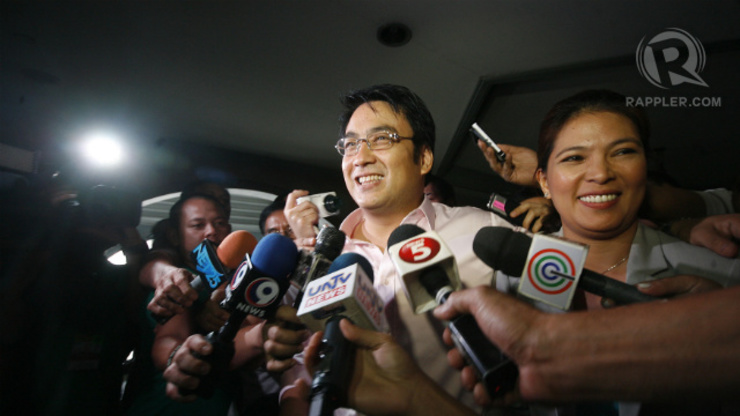 On Thursday, October 9, before the anti-graft court Sandiganbayan, a much-awaited testimony by a representative of the government’s financial intelligence unit revealed that cash deposits amounting to over P87 million made to Revilla’s and his family members’ accounts were consistent with the financial records of state witness Benhur Luy.

The time of deposits occurred within 30 days after supposed kickbacks over the pork barrel scam were delivered from Napoles to Revilla, as recorded by Luy who served as her financial officer back then.

The deposits were made from April 6, 2006 to April 28, 2010, years covered by the plunder case against Revilla for the alleged misuse of P224 million ($5 million)* in his Priority Development Assistance Fund (PDAF) or pork barrel.

The testimony of lawyer Leigh Vhon Santos of the Anti-Money Laundering Council (AMLC) comes following strong criticism from the defense teams that the prosecution has failed so far to offer proof that Revilla gained directly from the scam.

Earlier witnesses in the months-long hearing admitted to not seeing the senator directly deal with or receive money from Napoles. It was Revilla’s aide and now co-accused Richard Cambe who was seen collecting his boss’ commissions.

The Sandiganbayan First Division is hearing the pleas for bail of Revilla, Napoles, and Cambe, all charged with plunder and 16 counts of graft in relation to the scam.

The scam involves Napoles giving wads of cash as kickbacks to lawmakers like Revilla in exchange for enabling her dummy foundations to corner their PDAF. Liquidation reports were fabricated to feign the implementation of government projects.

Lawyers of Revilla, Cambe, and Napoles blocked Santos’ testimony, arguing that his knowledge as AMLC officer has nothing to do with the senator’s plunder case.

Santos is part of the AMLC team that investigated anomalies in Revilla’s bank accounts on the heels of the PDAF scam revelation in late 2013.

The team found that Revilla terminated his accounts and investments within the time news of the scandal broke out in the media.

A money laundering scheme was confirmed by the report, which was submitted by the AMLC to the prosecution last October 8.

Santos noted suspicious transactions and red flags in the cash outflow and inflow of the Revillas.

The account of Nature Concepts Development and Realty Corporation – a company controlled by Revilla’s wife and Cavite Representative Lani Mercado – was found to have P27.74 million ($618,931)* in deposits also consistent with the time Revilla supposedly received kickbacks from Napoles.

The accounts of NGOs alleged to be controlled by Napoles were also found to be mere “temporary repository of funds,” as “withdrawals take place almost on the same day deposits are made.”

The accounts are almost always left with a minimal balance after every transaction.

Napoles’ employees Marina Sula, Merlina Suñas, Evelyn de Leon, and John Raymund de Asis were the ones withdrawing money from these NGOs’ accounts, baring a relation between the NGOs and Napoles.

Sula, Suñas, De Leon, and De Asis were likewise using their IDs with the Napoles-owned JLN Corporation when they made the withdrawals.

Withdrawals were also made in cash despite susbstantial amounts involved. The AMLC said this is contrary to usual business practice.

No forfeiture case vs senators?

Findings in the report Santos testified about were the same findings cited in forfeiture cases against Napoles and Luy, among others, filed before the Manila Regional Trial Court (RTC) Branch 22. (READ: Manila court to hear Benhur Luy’s appeal vs assets freeze)

If found to be ill-gotten, their assets covered by the civil case will be permanently seized by the state.

The court earlier froze the subject properties and accounts of Napoles and Luy, but Revilla has yet to be impleaded or filed with a forfeiture case. (READ: Napoles family, ‘pork scam’ suspects can’t touch assets)

She added that the complete delivery of justice in relation to the scam should not “stop at the prosecution aspect” but also include the “recovery of assets.” – Rappler.com