US stops departure of ships after transgender woman’s slay 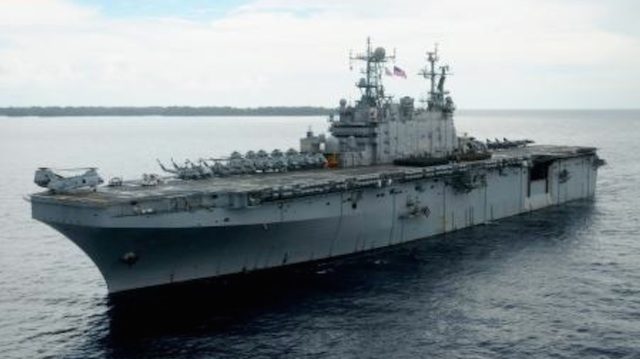 MANILA, Philippines (3rd UPDATE) – US Pacific Command Admiral Samuel Locklear III ordered to put on hold the scheduled departure of US ships pending the investigation on the murder of a transgender Filipino that tagged an American serviceman. (READ: US probes American tagged in Filipino’s death)

Peter Galvez, the chief of staff of Defense Secretary Voltaire Gazmin, told reporters: “It was relayed to me that Admiral Locklear gave the order to hold the departure of ships pending the investigation.”

Two US ships arrived in the Philippines – USS Peleliu and USS Germantown – to transport more than 3,000 US sailors and Marines who participated in the recently completed Amphibious Landing Exercise (PHIBLEX). (READ: 2 US warships in PH for naval exercises in West PH Sea)

Locklear is in the Philippines for the Mutual Defense Board-Security Engagement Board (MDB-SEB), which is expected to discuss the implementation of the Enhanced Defense Cooperation Agreement (EDCA), the new military-to-military agreement that allows Americans to build military facilities and preposition defense assets in “agreed locations” that have yet to be determined.

A police report on Sunday, October 12, identified the victim as Jeffrey Laude, also known as Jennifer.

Laude, 26, was found dead on the floor of a comfort room in Celzone Lodge, Olongapo City, according to the report signed by Police Chief Inspector Gil Arizo Domingo.

Laude’s head “was leaning” on a toilet bowl, while “his lower body was partially covered with a color cream blanket” as the victim was naked.

The “foreigner” with Laude had blonde, close-cropped hair, was of medium build, and “casually” walked out of the hotel later without settling his bill, prompting hotel staff to check the room, police investigator Mary Ann Sadaba told AFP.

They found Laude lifeless on the bathroom floor with marks on the neck, she added. The injuries suggest the victim was strangled but further investigation is required, Sadaba said.

“The foreigner is a suspect because he was the last person seen with the victim,” she said.

Eduardo Oban, an adviser to President Benigno Aquino III, told reporters the US troops who took part in the September 29-October 10 amphibious exercises have been ordered to remain in the country amid the investigation.

“The (US Pacific Commander) ordered that no US ships will leave the Philippines until we are done with the investigation,” said Oban, executive director of the Presidential Commission on the Visiting Forces Agreement.

About 3,500 US Marines and navymen took part in the joint exercises held in several areas of the Philippines, including training sites near Olongapo.
Foreign Secretary Albert del Rosario discussed the murder with US embassy officials in Manila on Monday, he told reporters.

“I think we will have a very close cooperation in making sure that justice is served,” he added.

In a statement, the US Embassy in Manila expressed its condolences with the family of Laude, “who was found dead in Olongapo City on October 11.” It added: A U.S. Marine has been identified as a possible suspect in the ongoing investigation. The United States will continue to fully cooperate with Philippine law enforcement authorities in every aspect of the investigation.”

In 2006, a Philippine court sentenced US Marine Lance Corporal Daniel Smith to 40 years in jail for raping a Filipina a year earlier.

Smith walked free in 2009 after his accuser recanted her statement, prompting the court to acquit him.

American soldiers and sailors regularly visit Subic Bay either for joint exercises, refueling or as they are in transit to another country. The Subic Naval Base was one of the largest US military facilities overseas until it closed down in 1992, a year after the Philippine Senate voted against the PH-US military bases treaty. – with reports from Carmela Fonbuena, Agence France-Presse and Randy Datu/Rappler.com