Where to quarantine 110 PH troops from Ebola-hit Liberia?

Oct 14, 2014 9:45 PM PHT
Carmela Fonbuena
Facebook Twitter Copy URL
Copied
The UN peacekeepers will have to be quarantined for 3 weeks and pass medical tests before they will be given a welcome party and be allowed to see their families 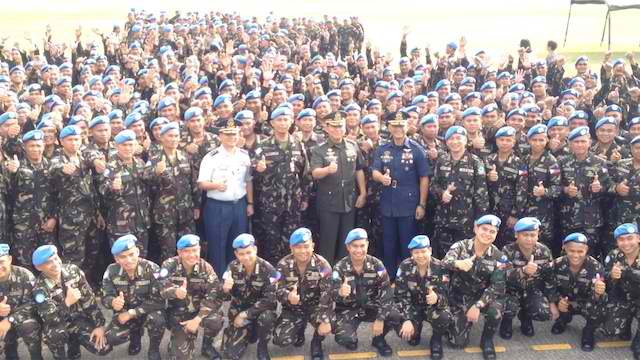 MANILA, Philippines – Apologies to the 110 Filipino United Nations peacekeepers who will be coming home from Ebola-hit Liberia on November 10 – there will be no heroes’ welcome for them.

The soldiers will have to be quarantined for 3 weeks and pass medical tests before the military can throw a welcome party for them.

“They will have to be quarantined for 21 days, all of them. And then, thereafter, we will give them a welcome party for passing the test,” Armed Forces chief General Gregorio Catapang Jr said on Tuesday, October 14.

Military spokesperson Lieutenant Colonel Harold Cabunoc said “proper protocols” will be observed upon the return of the troops from Liberia to comply with the guidelines of the Department of Health.

The military, however, has yet to find an area where the all-Air Force team will be isolated.

“As of now, we are still looking for a suitable quarantine area that has proper and sufficient facilities that can accommodate the 110-strong contingent,” said Cabunoc.

The soldiers cannot immediately reunite with their families, too.

“Should our peacekeepers be declared safe after the 21-day quarantine, they will be given a break and an opportunity to go back to their families, after which they will report to the Philippine Air Force, their mother unit,” said Cabunoc.

President Benigno Aquino III ordered the repatriation of Filipino troops in August because of the rising health risk posed by the outbreak of Ebola virus in Africa.

The Filipino troops have been ordered to take precautionary measures since the outbreak of the virus. They were told to restrict their movements to their offices and barracks. Meetings with local communities were also suspended. – Rappler.com