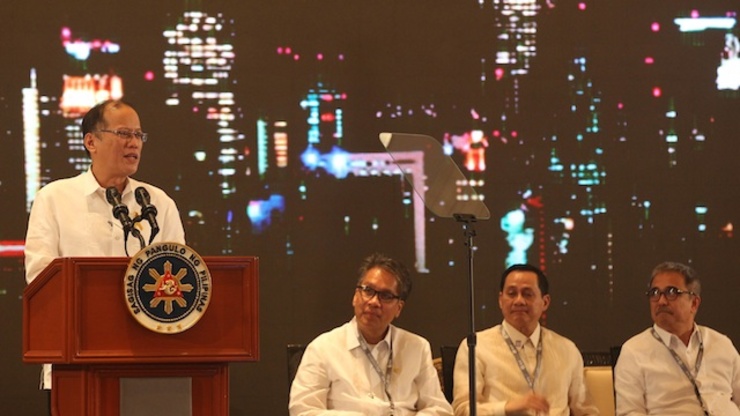 MANILA, Philippines – President Benigno Aquino III credited now Interior Secretary Manuel “Mar” Roxas II for the success of the IT-BPM (information technology and business process management) industry, which has become one of the fastest growing industries in the Philippines in recent history.

At the International IT-BPM summit on Tuesday, October 14, Aquino said the “turning point” came under the leadership of Roxas when he was still Secretary of Trade and Industry. Roxas became Interior Secretary in 2012 and is the presumed standard bearer of the ruling Liberal Party in 2016.

“Perhaps some of you here today can still remember the turning point: Then Secretary of Trade and Industry Mar Roxas took notice of the massive potential of your sector, reached out to industry leaders, and launched an organization whose purpose was to convince global companies to invest in the Philippines’ IT-BPM sector,” he said.

Before then, Aquino said the Philippines was the IT-BPM’s “best kept secret” and “only employed a few thousand workers and had yearly revenues of just a few million dollars.” The President said “there was no concerted effort to capitalize on this advantage.”

Since the turning point however, Aquino said the industry “has gone from success to success, and the transformation of the IT-BPM sector over the last decade has been staggering.”

“Eventually, through the confluence of efforts between the public and private sectors, and due to the sheer talent and skill of our greatest resource, the Filipino people, you succeeded in doing just that,” he said.

Among the successes of the industry that Aquino hailed were Manila’s jump to the number two spot in the 2014 Tholons Top 100 Outsourcing Destinations Report; the inclusion of Cebu, Davao, Sta Rosa, Bacolod, Iloilo and Baguio on the list; employment in the industry reaching the one-million mark as of September 2014; and its innovation.

Aquino said he is confident the industry will reach, if not exceed, its target of employing 1.3 million Filipinos.

At the same summit, officials said the industry is set to achieve a $48-billion revenue by 2020, after having seen a 12-fold increase since 2004 in terms of revenue, faster than the global industry which grew 5 times. In terms of workforce, the Philippines grew 10 times.

The President said the growth of the industry translates to “a million productive employees and empowered consumers, who stimulate the economy and, in turn, create even more jobs, thus spurring a virtuous cycle of inclusive growth.”

Aquino vowed the government would continue helping the industry expand.

“The tangible benefits that your industry brings to our people, by tapping their innate skill, talent, and creativity, has never been clearer, and I stand here today to tell you that our government has every intention of helping you continue growing and empowering our people,” he said.

Among the help the government has extended, Aquino said, is the enhancement of the capacities of the Technical Education and Skills Development Authority (TESDA) with the administration having invested more than P1.3 billion ($29 million)* in the Training for Work Scholarship Program for the IT-BPM sector.

The investment produced more than 65,000 graduates, 70.7% of whom are currently employed by the industry.

Aquino also said the government has allocated P125 million ($2.8 million)* for the roll out of the Service Management Program under the Commission on Higher Education. The 21-unit course aims to arm students with the skill sets needed for entry-level positions in the IT-BPM industry.

The President encouraged the industry to keep innovating and maximizing the potential of Filipinos.

“The story of the IT-BPM industry in the Philippines is one of hard work, ingenuity, sacrifices, and success. I am confident that, in the future, countries around the world will be looking to the Philippine example to see how we managed to achieve such striking success and become a global industry leader in just a short number of years,” he said. – Rappler.com