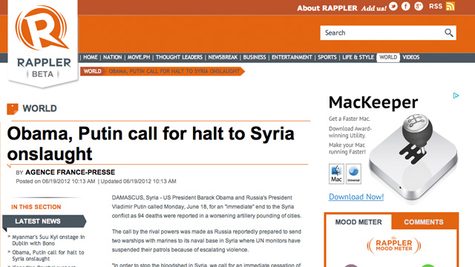 US President Barack Obama and Russia’s President Vladimir Putin call for an “immediate” end to the Syria conflict amid reports 94 people died to to shelling of rebel strongholds.
“In order to stop the bloodshed in Syria, we call for an immediate cessation of all violence…We are united in the belief that the Syrian people should have the opportunity to independently and democratically choose their own future.” The leaders pledge to work with UN-Arab League envoy Kofi Annan on the crisis, with little sign they had agreed on how to end the conflict. The United States has expressed frustration at Russia’s blocking of UN Security Council moves against Assad. Latest reports say Russia is ready to send warships and marines to its base in Syria.
Read more on Rappler.