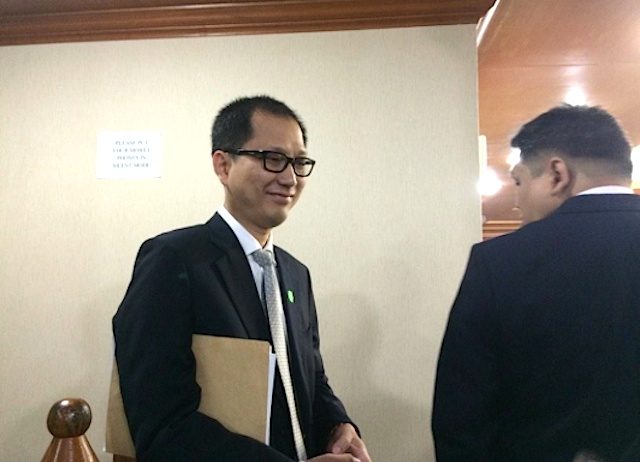 MANILA, Philippines – A political foe of Vice President Jejomar Binay on Wednesday, October 22, said the vice president was not just a “casual acquaintance” of businessman Antonio Tiu, who claims to own the 350-hectare farm in Batangas that critics say belong to Binay.

Speaking before a Senate Blue Ribbon subcommittee probing allegations of anomalies in Makati City when Binay was mayor, Renato Bondal said Binay and Tiu had close “political ties,” contrary to claims by the vice president.

Tiu owns Sunchamp Real Estate Development Corp, listed as the owner of a 350-hectare farm in Batangas. But the farm, according to Ernesto Mercado who was Makati vice mayor, is really owned by Binay.

Tiu has denied these allegations, despite Senator Antonio Trillanes IV’s insistence that they have documents to prove the allegations against him. Tiu said he is suing Trillanes for “damages.”

Binay faces plunder charges and is the subject of the subcommittee probe. The vice president, however, has dismissed the hearing as merely an attempt to bring him down and stop his chances in the 2016 presidential elections.

In previous interviews, Binay said his relationship with Tiu was limited to “his and hellos.” Tiu admitted that his brother, James Tiu, had donated P5 million to Binay’s vice presidential campaign. But Bondal said the Tiu family’s donations amounted to much more.

In 2010, Bondal said, James Tiu and his wife, Anne Lorraine Buencamino donated a total of P15 million to the vice president’s campaign. It makes them Binay’s top campaign contributor. Bondal questioned how the younger Tiu, only 27-years-old in 2010, could afford to give that much to the vice president. According to Bondal, Tiu was then the Director, Treasurer and Chief Finance Officer of Greenergy Holdings, Inc, which is owned by his older brother.

Prior to that, James was a Chinese interpreter for PAL and the manager of Fresh & Green Corporation. Bondal had one conclusion: James Tiu was used by someone in order to donate to Binay.

Bondal stopped short of saying it was really Antonio Tiu who donated to Binay’s campaign.

The donations to Binay were also notarized by lawyer Daniel Subido, brother of lawyer Mike Subido, the legal counsel of the vice president.

Daniel Subido was also once legal counsel of the Office of the Vice President before he was appointed Deputy Secretary General of Housing And Urban Development Coordinating Council, which the vice president chairs.

Trillanes, during the hearing, moved to subpoena James Tiu and Buencamino’s data from the Bureau of Internal Revenue, to check if the couple was financially capable of donating P15 million to Binay. – Rappler.com