Ordained by disaster: The priest of Yolanda Facebook Twitter Copy URL
Copied
'They saw a figure of hope in priests. You could see the spirit of courage in them.'

MANILA, Philippines – For almost two decades since he entered the Catholic seminary in Palo town, Anreco Estrella waited for the day he would face the cathedral’s altar for his ordination to the priesthood.

He thought it would never come when Yolanda (Haiyan), the world’s strongest typhoon in 2013, pummeled central Philippines on November 8. He even thought he would not survive that fateful day.

In the middle of a mass, Estrella and his fellow deacons ran for their lives as the howling winds ravaged the chapel and the archbishop’s palace where they were staying. A few kilometers away, the Palo Metropolitan Cathedral was stripped of its roof. “I’ve been through hell and high water, but I didn’t expect I would witness a disaster of this magnitude,” Estrella told Rappler, recalling his experience a year after the tragedy.

He lost count of how many dead bodies he blessed along the way from Palo to his nearby hometown of Dagami, a trip that took him 3 hours and several rounds of the rosary to reach.

“Pabalik-balik, an pinaka-maiha nga akon pag-rosaryo (It was the longest time I prayed the rosary, saying it again and again),” Estrella said.

The disaster left more than 6,300 individuals dead, affecting nearly 16 million people and destroying more than a million houses. (REVISIT: Rappler’s full coverage of the impact of the typhoon)

“I’ve been through hell and high water, but I didn’t expect I would witness a disaster of this magnitude.”

On November 25, 2013, under the searing heat of the sun, Estrella lay prostrate before the altar of the Palo cathedral, ready to be finally ordained a priest.

The Litany of the Saints was being chanted. As holy names were mentioned, the congregation replied in chorus, “Pray for us.”

The invocation reverberated through the church as if it were a cry for help and divine intervention.

“It was very solemn. You could feel the emotions,” Dexter Dumduma, a youth ministry leader from Dagami town, described the ordination rite. Estrella was grateful the day arrived, but he was also in grief.

A generous benefactor, Sarah Cagara, who helped support Estrella’s Theology education, did not live to see him wear the priestly stole and chasuble.

Since he graduated in 2011, Estrella only met Cagara once.

“I was very grateful to see her. Guinsigngan ko hiya nga kun ma-ordinahan ako, kinahanglan aadto hiya (I told her that if I will be ordained, she should be there),” Estrella recalled saying when he first met his anonymous benefactor, a widow and retired nurse.

Cagara’s body was found inside her house in Tacloban City – lifeless, covered in mud, and swollen after being submerged in seawater for hours – after the storm surge receded.

“The deacons saw the ruins, but they still said yes to God. It’s heroic.”

Failure of government, triumph of faith

Everyone in the roofless cathedral during the ordination – from the archbishop to the laity – was a victim and a survivor.

“The deacons saw the ruins, but they still said yes to God. It’s heroic,” Fr Lito Maraya, Rector of the Sacred Heart Seminary in Palo, said.

It gave the people a sense of “hope at a time when the government was failing and what you were seeing around were ruins,” Maraya added. There was barely a semblance of authority during the critical days after the disaster. Relief goods were not reaching far-flung towns. For many victims who lost loved ones, the stench of death was stronger than their will to live.

“Waray anay an tawo kadto ha munisipyo. Kumadto hira ha simbahan (The people did not immediately go to the municipal hall to seek refuge. They went to the church instead),” 26-year-old seminarian Brylle Callera recalled. Thousands of hungry and homeless people flocked to chapels and churches. The retirement house for priests was turned into a hospital and evacuation center. Church grounds became mass graves.

Callera remembered carrying a dead baby boy and helping rescue others. He joined Estrella and other seminarians and priests in distributing relief goods and provided comfort to weeping widows, men, and children. 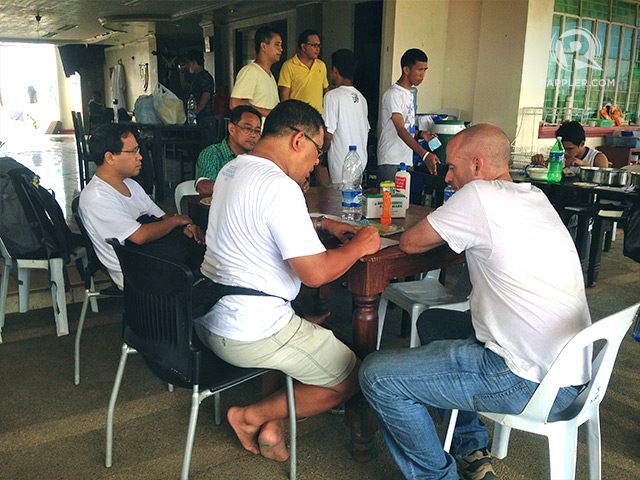 It is the same faith that the church wants to rebuild when Pope Francis visits Leyte a few months after the Yolanda anniversary, according to Estrella.

“Napaid hiya ha aton (The pope empathizes with us). It the highest form of giving hope to the people. Aadi an lider han simbahan (The leader of the church is with us). The church is for the people,” Estrella said.

In a sea of destruction and despair, the church stood out as an inspiration to many survivors in the predominantly Catholic province.

“They saw a figure of hope in priests. You could see the spirit of courage in them,” said Callera, who is preparing for his diaconal ordination.

He believes he saw that spirit in Estrella and the other new priests as he was assisting the archbishop at the altar during the ordination mass, and throughout the Yolanda ordeal. – Rappler.com

For Rappler’s full coverage of the 1st anniversary of Super Typhoon Yolanda (Haiyan), visit this page.