Nov 4, 2014 5:51 PM PHT
Michael Bueza
Facebook Twitter Copy URL
Copied
Among those who have bought bidding documents is Smartmatic, whose participation is criticized due to unresolved and persistent issues with its PCOS machines 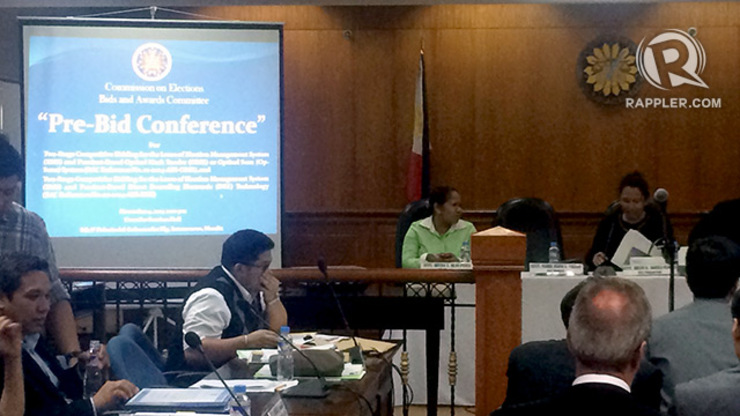 MANILA, Philippines – Five companies – including Smartmatic-TIM Corporation that supplied the vote counting machines in the last two Philippine elections – have expressed their intention to bid for the lease of automated election systems (AES) for the 2016 national and local elections.

Some groups, however, opposed the participation of Smartmatic in the bidding process. It was mainly due to unresolved and persistent issues with the precinct count optical scanner (PCOS) machines that it supplied the poll body during the 2010 and 2013 elections. (READ: Persistent issues cast doubt on PCOS reliability)

The Commission on Elections (Comelec) opened on October 27 the two-stage competitive bidding for the lease of two types of AES: the optical mark reader (OMR) and the direct recording electronic (DRE) systems.

Five firms purchased bidding documents as of the pre-bid conference on Tuesday, November 4:

Included in the invitations to bid are the lease of 23,000 OMR machines and 410 DRE machines. These will augment the nearly 80,000 PCOS units in Comelec’s inventory for the 2016 polls.

PCOS machines make use of the OMR technology. Meanwhile, DRE machines, which have touchscreen features, will only be used in select metropolitan areas in 2016.

Besides the machines, other items in the invitations to bid for both voting systems are ballots (except for the DRE, which does not make use of ballots), ballot boxes, and the hiring of technical support personnel.

Interested bidders have until December 4 to submit eligibility requirements and initial technical proposals to the poll body.

“They will need to prove their eligibility in terms of legal and financial aspects. From December 4 to 19, the committee’s technical working group will also look into their initial technical proposals,” bids and awards committee (BAC) chairman Helen Aguila-Flores said.

Initial proposals that would pass basic or minimum parameters will be further examined in the second stage of the bidding process, where bidders should meet final technical specifications.

Hours before the pre-bid conference on Tuesday, a labor group held a protest outside the Comelec office in Intramuros, Manila, where they called for the disqualification of Smartmatic in joining the bidding process and in future elections.

In a press statement, the National Labor Union (NLU) said that Comelec has “become a patron of Smartmatic-TIM.”

“The bid rules and project specifications are lopsidely in favor of Smartmatic-TIM” therefore ensuring “total control of the entire electoral process” by the company, the NLU added.

The NLU also noted issues with PCOS machines in past elections, as well as the ineligibility of Smartmatic-TIM. It echoed claims by other critics that Smartmatic-TIM is not an ISO 9001-certified company, and does not satisfy the 60-40 local-to-foreign ownership requirement.

“That is why we should pay heed in the coming bidding, and play our part in keeping the sanctity of our election process, by calling out mistakes and problems even before they happen,” the NLU said.

As for concerns aired against Smartmatic, the Comelec BAC said that it will not be biased to any bidder, saying that the specifications and terms of reference it set are in accordance with the law.

“This committee is not taking speculations into account. We can only be bound by orders from the procuring entity or maybe the Supreme Court. Otherwise, those who will come here to bid will be treated equally,” said Flores said.

“As far as procurement of any goods and services that we are mandated to procure is concerned, you can be assured that this committee will be fair to all prospective bidders,” she added. – Rappler.com