Nov 7, 2014 10:24 AM PHT
Raisa Serafica
Facebook Twitter Copy URL
Copied
Cigarette companies are mandated by a new law to place bolder warnings against smoking in their cigarette packs by 2015 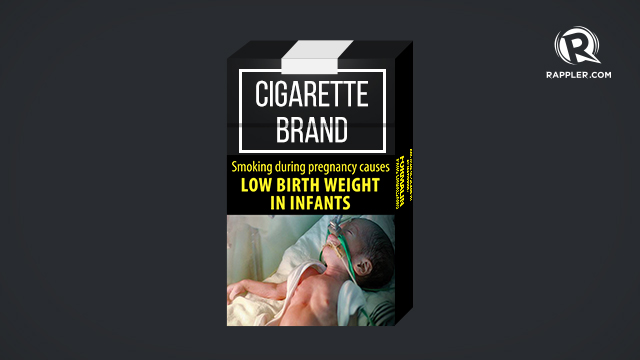 MANILA, Philippines – This time next year, expect to see cigarette packs with bolder graphic health warnings (GHWs) on the dangers of smoking.

Health Spokesperson Lyndon Lee Suy confirmed to Rappler that the Department of Health has issued the guidelines and the 12 templates for the new cigarette packs on Wednesday, November 5.

Cigarette manufacturers are mandated by Republic Act 10643  to comply with the new packaging rules one year after the issuance of the templates.

The new cigarette packs, anti-smoking advocates say, will discourage young teenagers from taking up the habit.

“The law is actually primarily intended for children who are considering to start smoking,” said Ma Encarnita Limpin, head of the Framework Convention Alliance for Tobacco Control in the Philippines (FCAP).

A year after the full implementation of the law, FCAP is expecting an increase in the number of young Filipino non-smokers.

The visual warnings, however, may not be enough for smokers to quit cold turkey.

Following the new GHW templates, half of the front portion of the new cigarette packs will include images of a diseased mouth, a bedridden and suffering lung cancer patient, or an innocent little child inhaling second hand smoke. (READ: Look, mate, scary cigarette packs)

Tobacco companies are also expected to rotate the use of the 12 templates periodically for each brand and variant.

Under the law, “no part of the warning may be obliterated, obscured, folded, severed or become unreadable when the tobacco package is opened or closed or when a wrapper on the package is removed.”

The violations and the corresponding penalties are the following:

In the Philippines, 240 Filipinos die every day due to tobacco-related diseases, according to the World Health Organization (WHO). Worldwide, more than 5 million people die each year as a result of direct tobacco use.

Advocates say the use of graphic health warnings on cigarette packs is garnering growing global support, and is backed by some cigarette companies.

President Benigno Aquino III signed the Graphic Health Warning law in July 2014, years after the bill got stalled in Congress. 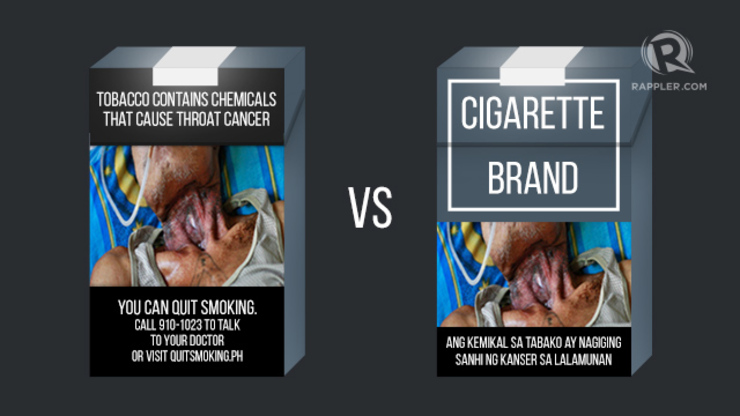 INFOGRAPHIC: What a scary cigarette pack in PH will look like

The Cigarette Package Health Warnings: International Status Report showed that the number of countries with GHWs increased from 34 in 2010, to 55 in 2012, and to 77 in 2014. The countries that are compelling tobacco companies to include graphic warnings on cigarette packs account for 49% of the world’s population.

Thailand has the world’s largest GHWs, covering 85% of the front and back of cigarette packs. Australia’s GHWs come second with an average of 82.5% (75% front and 90% back) coverage of the cigarette pack. This is in addition to requiring plain or standardized packaging which was implemented since 2012.

The WHO’s Framework Convention on Tobacco Control calls for the implementation of visual health warnings on all tobacco product packaging and labeling.

“Graphic health warnings are really a cost-effective measure in curbing smoking especially with those who are just thinking about giving it a try, and I’m ecstatic everybody has caught on the so-called trend,” said Emer Rojas, Global Cancer Ambassador and president of the New Vois Association of the Philippines. – with reports from Jee Geronimo/Rappler.com