Nov 5, 2014 6:17 PM PHT
Bea Cupin
Facebook Twitter Copy URL
Copied
Senator Antonio Trillanes IV, who had set an earlier deadline on the debate, accepts the date and says he will 'bend backwards' to have his face-off with Binay 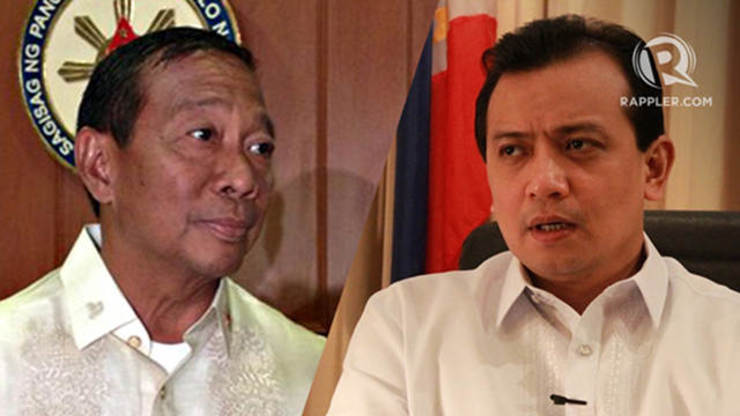 MANILA, Philippines – The highly-anticipated “debate” between Vice President Jejomar Binay and Senator Antonio Trillanes IV has been set for November 27, according to the chief of the group tasked to organize it.

In an interview on the ABS-CBN News Channel (ANC), Kapisanan ng mga Brodkaster ng Pilipinas (KBP) president Herman Basbaño confirmed that the two camps have agreed on November 27 as the date for the debate, although he clarified that they have to iron out details such as the “ground rules” and the topics that will be covered.

Basbaño made the announcement on the eve of the Senate probe on the alleged overpriced Makati City parking building, where Binay had been invited. The Vice President has not responded to the invitation as of posting, and may do so as late as the morning of the hearing, scheduled at 10 am on Thursday.

Trillanes, who had earlier set a November 22 deadline on the debate, said in a text message, “Call. I will bend backwards again just so that this debate would finally push through.”

But in a text message to Rappler, Binay’s spokesman for political affairs Cavite Governor Juanito Victor Remulla said the date has not been finalized and that they are “still negotiating” it.

“We still have a meeting next Tuesday (November 11) to finalize it,” said Remulla, who represents the Binay camp in coordination meetings with the KBP, which is organizing the debate and acting as the conduit for both parties.

The planned “debate” is a challenge from the Vice President, who faces plunder charges over an alleged overpriced Makati building and is accused of rigging bids and recieving kickbacks during his time as Makati mayor.

Trillanes is one of 3 senators leading a  Senate probe into corruption allegations against Binay. It was also Trillanes who filed the resolution calling for the probe.

Binay’s challenge came as clamor for him to appear before the subcommittee grew. The Senate probe, triggered by the building, has since turned into a forum for “whistleblowers” – Binay’s former allies and long-time foes – to tell tales of Binay’s corrupt ways.

The Vice President has snubbed the subcommittee’s invite and has called it a “kangaroo court” that has already judged him. The Blue Ribbon “mother committee” has invited Binay to its scheduled Thursday, November 6 hearing.

Binay has yet to say if he will be attending the hearing or not.

In a separate interview on ANC, Trillanes said Binay should show up at the Thursday hearing even if their debate pushes through since it would give him the chance to prove his innocence. – Rappler.com