Nov 6, 2014 10:27 AM PHT
Bea Cupin
Facebook Twitter Copy URL
Copied
The Vice President shuns the Senate Blue Ribbon Committee invitation to address the corruption allegations against him, and opts to go to Cebu instead 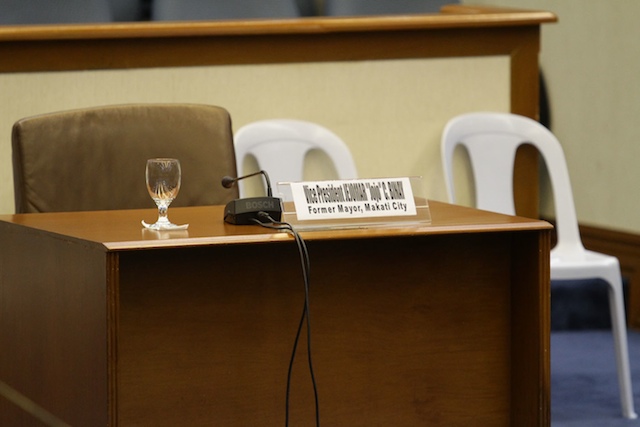 MANILA, Philippines – The Senate session hall had a different set-up on Thursday, November 6, in anticipation of special guest Vice President Jejomar Binay – the subject of a probe on corruption allegations stemming from a city building built during his time as Makati mayor.

But the Vice President, who faces the biggest corruption scandal to hit him to date, was a no-show at the Senate Blue Ribbon Committee hearing especially arranged  to accommodate him.

In a letter delivered to Senate Blue Ribbon chair Teofisto Guingona III, committee chair, just before the 10 am hearing, Binay cited several reasons for his decision, among them, his belief that he would not get any fair treatment. (READ: Binay blames Cayetano, Trillanes for Senate no-show)

Guingona deemed Binay’s decision as a “waste” as it would been the “proper time and forum” to air his side of the issue. (READ: Guingona on Binay snub: ‘Sayang’)

DZBB reported that the Vice President arrived in Cebu City at around 10:15 am via Philippines Airlines. An interview with a local radio station was reportedly  the first item in his Cebu itinerary.

Binay, who was Makati mayor for more than two decades, is accused of amassing ill-gotten wealth by rigging bids to favor select contractors and getting kickbacks from city projects. The probe, which is being heard by the Blue Ribbon’s subcommittee, started in August to look into the alleged overpriced Makati City parking building.

It has since morphed into a forum where whistleblowers – Binay’s former allies and political foes alike – had made a string of exposés against the Vice President and his family. The November 6 hearing was supposed to be Binay’s chance to address the allegations against him

The committee was to wait for Binay for an hour or until 11 am before deeming him a no-show, but its members were seen heading to the senators’ lounge at around 10:20 am apparently to discuss his letter that has handcarried by his spokespersons, UNA interim president Navotas Representative Tobias Tiangco, and UNA interin secretary-general Jose Virgilio Bautista.

Binay has dismissed the probe and the 3 senators leading it as a “kangaroo court” that has long pre-judged him. He claims the probe is merely part of a ploy to ruin his chances in the 2016 elections.

Binay had snubbed repeated invites from the subcommittee, prompting the “mother committee” to formally invite the Vice President on October 28. Guiingona had said that this was to address Binay’s qualms over facing the subcommittee.

A survey conducted in late September showed 79% of Filipinos agreed that Binay should face the subcommittee. Binay has held press conferences and a big event to “address” the allegations against him, but based on survey results, this has done little to appease the public.

Although he remains the most trusted public official and the top contender for the 2016 presidential race based on polls, Binay’s approval numbers have dropped since the probe began.

With Binay as a no-show, the subcommittee is expected to reconven and  push through with its scheduled hearing.

Senator Antonio Trillanes IV, one of 3 senators leading the investigation, had said they will be discussing another alleged overpriced project, the construction of the Makati Science High School building. – Rappler.com