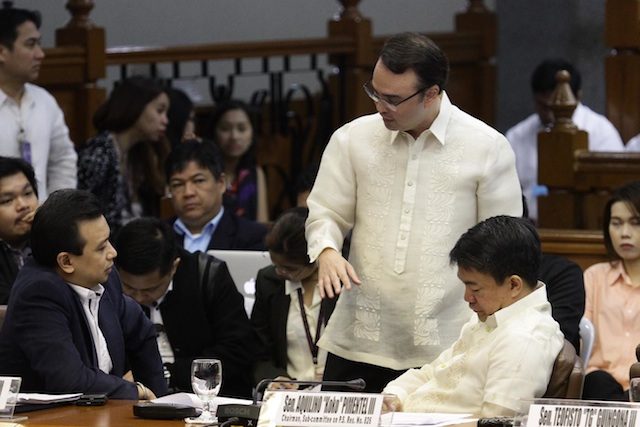 MANILA, Philippines – Vice President Jejomar Binay seriously considered attending the Senate Blue Ribbon Committee hearing on Thursday, November 6, but the “behavior” of two senators involved in the probe made him decide not to.

This was the gist of Binay’s letter to the Blue Ribbon chair, Senator Teofisto Guingona III, handcarried by his spokespersons – UNA interim president Navotas Representative Tobias Tiangco and UNA interim secretary general Jose Virgilio Bautista – to the senator’s office before the scheduled 10 am hearing.

“I admit that when I received the said invitation, I thought of attending the hearing to refute the charges against me,” Binay said in his two-page letter, copies of which were provided to the media.

He added: “You assured me in your letter that if I were to show up in the Senate, I will be accorded a fair hearing and I will be given the respect that befits my position as Vice President of the Republic. However, recent events, especially the behavior of Senators Trillanes and Cayetano, gave me reason to doubt such an assurance.”

Binay cited Cayetano’s treatment of Tiangco and Bautista when they attempted to represent the Vice President – backed by a written authorization – at the October 30 hearing of the Senate Blue Ribbon subcommittee.

He said that during the October 8 hearing, Cayetano issued an “open invitation” to the Binay camp to submit evidence and “send witnesses to testify” at the probe.

“However, when Rep. Tiangco and Atty. Bautista came to attend, it was Senator Cayetano himself who drove them away,” the Vice President said.

He said that such behavior of Cayetano and Trillanes not only in the October 30 hearing but past hearings as well “proves that they are not ready to hear any explanation that contradicts their conclusion that I am guilty.”

Binay also criticized the Senate for tolerating what he called the “continued bullying, debasement, suppression and intimidation of ordinary people whose testimonies contradict their conclusion” at the hearing.

“Those invited to the hearings are ‘resource persons in aid of legislation,’ in other words, they were invited to help craft laws, as contained in the resolution. But they have been treated like criminals,” he said.

Binay said that based on this observation, “I see no assurance that I will be given the chance to speak freely, that my rights will be recognized, or that the Office of the Vice President of the Philippines will be accorded the respect it deserves.”

“This will set a bad precedent, where the Vice President, the second highest official of the land, can be summoned to a hearing by some senators….Because of these reasons, I have decided not to attend the Senate hearing on November 6,” he said.

He submitted an affidavit containing his “detailed response to the baseless accusations and lies of our political rivals” arising from the Senate probe and asked that it be included in the Senate records, which Guingona acceded to.

Binay also reiterated the authorization he had given the UNA officials to represent him at the hearings, which the committee voted down. The Vice President had wanted his UNA representatives to read his statement at the Thursday Senate hearing.

‘What are they afraid of?’

In a news briefing held at the same time as the Senate probe,  Bautista lambasted the subcommittee members – Senators Aquilino Pimentel III,  Trillanes, and Cayetano – for “abusing” their powers as legislators.

“The subcommittee can abuse their powers and they have been abusing their powers. We want to stand up to them,” Bautista told reporters.

Bautista took exception to Cayetano’s move to bar them from speaking at the October 30 hearing.

Binay faces plunder charges and is the subject of the subcommittee’s probe into allegations of bid rigging and kickbacks during Binay’s time as Makati mayor. Instead of facing the Senate himself, Binay sent Tiangco and Bautista to represent him.

Binay is currently in Cebu for scheduled engagements and media interviews.

Guingona said he personally wanted to allow Bautista to read Binay’s letter but said he was “outvoted.”

Binay had earlier expressed through his spokesmen his willingness to attend today’s hearing, despite the opposition of his allies. Tiangco said Binay only informed him of his final decision at around 9:30 pm on Wednesday.

Bautista again criticized the 3 senators for only listening to former Makati vice mayor Ernesto Mercado whom they have called an “impeached witness” and a liar.

With the “way [the Senate subcommittee] is acting,” said Tiangco, it would be unlikely for Binay to show up. Binay, however, is set to face Trillanes in a one-on-one debate on November 27. – Rappler.com