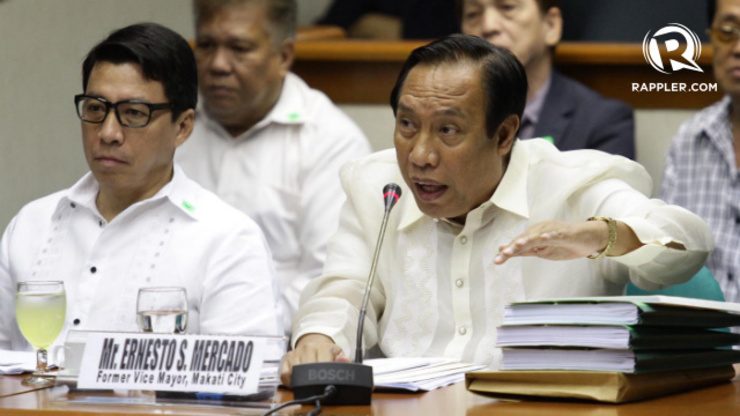 MANILA, Philippines – From the late 1980s up to the late 1990s, Vice President Jejomar Binay owned several dollar accounts in foreign banks that he did not declare in his Statements of Assets, Liabilities, and Net Worth (SALN) during that period, his former vice mayor said.

Former Makati Vice Mayor Ernesto Mercado showed before the Senate Blue Ribbon subcommittee on Thursday, November 6, documents that showed Binay had at least 7 foreign accounts when he was still mayor of Makati.

According to documents presented by Mercado, Binay had the following foreign accounts:

One document of the ABN bank Hong Kong dollar time deposit account shows a stamp from the “Office of the Mayor.”

According to Mercado, Binay also owned at least 3 other foreign accounts with his long-time aide and supposed bagman Eduviges “Ebeng” Baloloy:

The foreign accounts under Binay’s name are not reflected in his SALN, Mercado said.

In 1996 for instance, Binay said in his SALN that he had a little over P1 million in cash. But during that period, dollar accounts in Citibank Hong Kong had a standing balance of over P3.9 million, said Mercado.

Mercado claimed he obtained the two boxes worth of documents from someone in Binay’s camp.

Rappler asked Binay spokesman Cavite Governor Jonvic Remulla to respond to the accusations but he has yet to comment as of posting.

Senator Aquilino Pimentel III, the chairman of the subcommittee, only allowed Mercado’s presentation of the bank documents “on a provisional basis” since they might not be relevant to the resolution which sparked the probe.

Mercado did not stop with just accounts under Binay’s name.

Mercado said Limlingan regularly gave reports on the accounts to Binay, and showed handwritten notes to prove it.

One note dated “Nov 16” listed down several transactions amounting to over P66.6 million – higher even than Binay’s current net worth of around P60 million.

Pimentel was at first hesitant to allow Mercado’s presentation, but Senator Alan Peter Cayetano said the files should be relevant since it involves Baloloy and another alleged Binay bagman, Gerry Limlingan.

Initially convened to investigate an allegedly overpriced Makati building, the hearings have since turned into a venue for whistleblowers – former allies, former Makati employees, and long-time political foes – to accuse Binay of amassing ill-gotten wealth during his stint as Makati mayor through bid rigging and kickbacks from city projects.

Binay allegedly hid his wealth through dummies, among them Baloloy, Limlingan, and businessman Antonio Tiu.

Both Baloloy and Limlingan have been subpoenaed by the Senate but so far have failed to show up. Pimentel, before the hearing ended, ordered a show-cause order against the 2.

The Senate Blue Ribbon “mother committee” invited Binay to the November 6 hearing, but he opted to fly to Cebu instead.

Pimentel said the supposed dollar accounts would not be included in the subcommittee’s records and that moving forward, he would not allow presentations about any alleged mis-declarations in Binay’s SALN, pointing out that this would require a different Senate resolution.

In an interview after the hearing, Trillanes, who filed the resolution which sparked the probe, said he does not plan to request a separate inquiry into Binay’s SALN.

“We’ll just be submitting these to concerned bodies for further investigation. What is important for me is makita ito, na as (is that we show as) early as the 80s may propensity [si Binay] to accumulate ill-gotten wealth,” Trillanes told Rappler. – Rappler.com