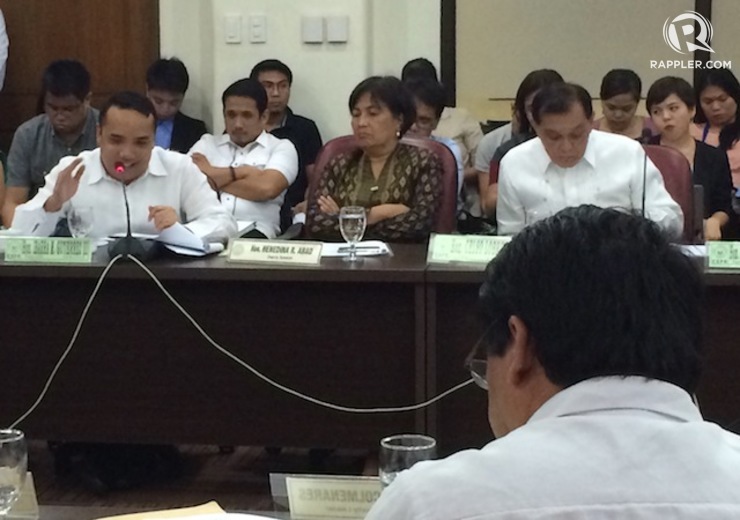 MANILA, Philippines (5th UPDATE)  – Voting 10-3, the public information committee of the House of Representatives on Monday, November 24, approved the consolidated version of the proposed Freedom of Information law.
It will now move to the plenary for deliberations. (READ: How access to information laws can help you)
The bill installs fast procedures to access government documents. It proposes administrative and criminal liabilities for those who do not follow the proposed law.
The 3 lawmakers who voted no to the bill were Bayan Muna Representative Neri Colmenares, Camiguin Representative Xavier Jesus Romualdo, and Act Teachers Representative Antonio Tinio.
Those who voted yes were Representatives Teddy Brawner Baguilat Jr, Henedina Abad, Emmeline Aglipay-Villar, Abigail Ferriol-Pascual, Maximo Dalog, Leopoldo Bataoil, Celso Lobregat, Barry Gutierrez, Walden Bello and Leah Paquiz.
Just minutes into the committee hearing, DIWA Representative Emmelyn Aglipay moved to adopt the technical working group (TWG) report on the FOI bill, saying that the measure had been discussed enough during the 9 TWG meetings heard over the course of the past year.
Members of the Makabayan Coalition in the House opposed the motion. Bayan Muna Representative Neri Colmenares said the committee should first hear the objections of some House members.
But House public information committee chair Jorge Almonte said objections and proposed amendments may still be tackled during the period of debates and amendments, and ruled that the motion should be voted upon. (READ: Why the Philippines needs a freedom of information law)
The 7-member Makabayan bloc earlier released a position paper criticizing certain provisions, which they said rendered the proposed law “toothless.”
They said Section 7 of the proposed law “contains unjustifiable exceptions” that will “make it easier for government to withhold information and make it difficult for the media and the public to access information.”
For the Makabayan bloc, only 4 exceptions should be included in the bill – information pertaining to national security and diplomatic negotiation as qualified by the bill, criminal investigations, the right to privacy of private individuals, and legitimate commercial secrets.
The coalition said the consolidated version of the FOI bill does not provide unqualified access to the Statement of Assets, Liabilities and Net Worth (SALN) of government officials since it will still be subject to “existing laws, rules and regulations.”
In the House of Representatives, for instance, only summaries of the SALNs are released to the public and access to the SALNs themselves is subject to the approval of individual lawmakers.
In their position paper, the Makabayan bloc also criticized the bill for expanding so-called “executive privilege.” They said the law should not give “blanket authority” to government officials to exempt from the FOI bill minutes and advice expressed during decision-making if it will likely frustrate policy formulation.
This will defang the FOI bill, Colmenares said, and could be used by government officials as an excuse not to disclose information in documents of high public interest. (Fast Facts: Freedom of information laws around the world)
Defense
Advocates of the FOI bill in the House also prepared a position paper in response to the positions made by the Makabayan bloc.
On the issue of SALN access, Akbayan Representative Barry Gutierrez said there is nothing in the law that limits access to SALNs. It only includes the option to redact private information in the document, he added.
Gutierrez argued that the proposed FOI law goes a step further and even requires the mandatory disclosure of SALNs in government websites even without a request.
The provision covers the SALNs of high-ranking government officials such as the:

Romualdo, one of those who opposed the move to adopt the TWG report, expressed reservations about the capacity of local government units, such as barangays, to come up with websites within a timeframe of two years.

The proposed law requires all branches of government to upload public documents, including their annual budgets and bid results, on a website.

Romualdo said the local government officials were not consulted on the bill. Aglipay, in response, said the bill provides for capacity-building measures.

The Camiguin representative also raised concerns over whether the Ombudsman has the manpower and capability to resolve FOI cases, as mandated under the bill.

Romualdo warned that the provision stating that the exhaustion of administrative remedies will no longer apply could swamp the courts and the Ombudsman with FOI cases.

In an interview after the hearing, Ifugao Representative Teddy Brawner Baguilat Jr said advocates hope to pass the FOI bill on 3rd reading by the middle of 2015.

The Senate, meanwhile, passed the measure on 3rd and final reading in March.

The bill came close to becoming a law in the 14th Congress but the House of Representatives failed to ratify it due to the lack of a quorum.

While the FOI bill hurdled the committee during the 15th Congress, there was not enough time to tackle the law by the time it reached the plenary.

It also “helped” that Almonte, the committee chair, was supportive of the advocates’ move to end discussions at the committee level and bring the debates to the plenary.

Asked about the support of the House leadership, Baguilat said: “They sent monitors. Whatever happens, we have Ma’am Dina Abad. We’re happy that the Speaker is supportive of this. There’s no move to say, ‘Don’t vote on this.’ He has been saying it publicly so we did our job to bring it to the plenary because everybody has been saying, ‘How can we endorse it if it’s still in the committee?”

Abad is one of the Deputy Speakers in the House. She is also the wife of Budget Secretary Florencio “Butch” Abad.

Meanwhile, Malacañang welcomed the passing of the bill at the committee level, with Deputy Presidential Speaker Abigail Valte saying the Palace is “satisfied with the current draft.”

“We have participated in the technical working group sessions and have kept communication lines open with citizen advocates. The draft likewise contains Open Data principles as proposed by this administration,” she said.

She added the President “hopes to see the FOI passed before the end of his term,” as he mentioned at the Daylight Dialogue last July.

Read the position papers of the Makabayan bloc and the response of other authors of the FOI bill below.

Answer of the other authors to the position of the Makabayan bloc: