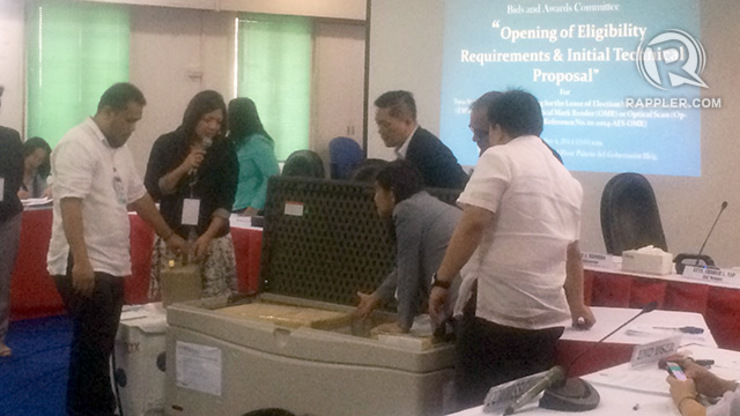 MANILA, Philippines – The Commission on Elections (Comelec) on Thursday, December 4, opened bids for additional voting machines for the 2016 national elections.

Out of the 5 companies that earlier bought bidding documents from the Comelec, only two – Smartmatic TIM and Indra Sistemas – were able to submit eligibility requirements and initial technical proposals on time, said the Comelec bids and awards committee (BAC).

E-Konek Pilipinas withdrew from the bidding process because its partnership with another company did not materialize. Miru Systems, on the other hand, would not be able to complete the consularization of their documents in time for the opening of bids.

The Comelec BAC has yet to hear from the last prospective bidder, Election Systems & Software.

The bids received by the Comelec BAC on Thursday were for the two-stage competitive bidding for the lease of 23,000 optical mark reader (OMR) machines. They are meant to augment the existing 80,000 precinct count optical scan (PCOS) machines for the 2016 polls.

The committee allotted two weeks for the evaluation of the bidders’ eligibility documents, and the end-to-end testing of their election management systems, said Comelec BAC chairperson Helen Aguila Flores.

The BAC would then recommend the bidders’ proposals to the Comelec en banc. Afterwards, it would come up with the final technical specifications for the second stage of the bidding process, where the bidders that passed the first stage would submit final technical and financial proposals.

“Hopefully, by February, we could award the contract,” Flores said.

The approved budget for the contract of the OMR election system is P2.5 billion. It includes the procurement of ballots and ballot boxes, and the hiring of technical support personnel.

Meanwhile, the opening of bids for the lease of 410 direct recording electronic (DRE) voting machines was moved to Saturday, December 6. The DRE machines, which use touchscreen technology, would be tested in a pilot project by the Comelec in the 2016 polls.

Before the opening of bids began, the Comelec BAC addressed petitions to blacklist Smartmatic and to stop the public bidding itself.

In its Resolution Number 1, the Comelec BAC denied due course to the petitions of 9 groups and poll watchdogs to ban Smartmatic from the public bidding. It said that, among others, they are not duly authorized observers and have no legal personality to initiate the blacklisting.

The Comelec BAC also replied to a letter by former Misamis Oriental Assemblyman Homobono Adaza and co-petitioner Jonathan Siñel, who filed a petition before the Supreme Court to stop the public bidding itself.

Adaza and Siñel said that Comelec should first conduct a physical inventory as well as forensic and technical tests on the existing PCOS machines before proceeding with the public bidding. They also prayed that Smartmatic be banned from participating in the bidding process due to issues in past elections.

Smartmatic-TIM supplied the PCOS machines that were used in the 2010 and 2013 polls.

In response, the Comelec BAC said, “We took note of the letter without taking any action.” – Rappler.com