Dec 8, 2014 11:47 PM PHT
Rappler.com
Facebook Twitter Copy URL
Copied
(UPDATED) The storm is seen to be out of the Luzon landmass by early Tuesday morning, and out of the Philippine Area of Responsibility (PAR) by Wednesday evening. 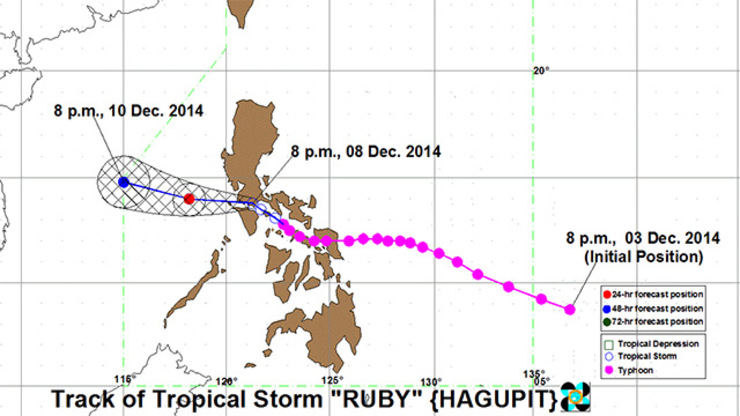 In its 11 pm bulletin, PAGASA said Ruby was carrying maximum sustained winds of 65 km/h near the center and gustiness of up to 80 km/h. As of 10 pm, its center was located at 45 kms south of Ambulong, Tanauan City, Batangas.

Ruby is forecast to move west at 13 km/h, added PAGASA. It brings moderate to heavy rains (5 to 15 mm per hour) within its 300-km diameter.

The storm is seen to be out of the Luzon landmass by early Tuesday morning, and out of the Philippine Area of Responsibility (PAR) by Wednesday evening, December 10, the bureau said.

Public storm warning signal number 2 is in effect over these areas: 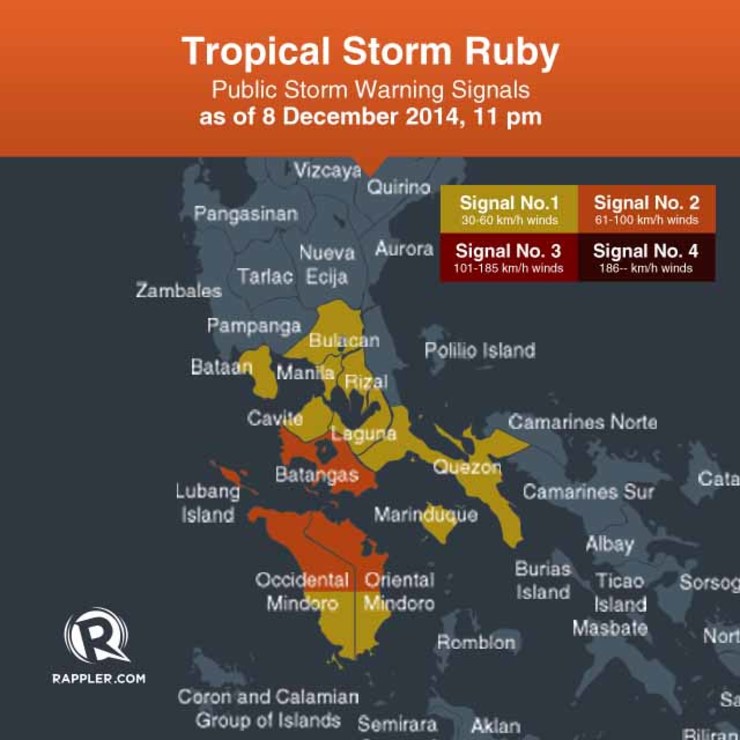 Meanwhile, these areas are placed under signal number 1:

Storm signals elsewhere have been lowered.

Ruby and the northeast monsoon will cause rough to very rough sea conditions over the Luzon and Visayas seaboards, said PAGASA. Fishermen and those using small boats in these areas are advised not to head out to sea.

The center of Ruby made landfall over Laiya, San Juan, Batangas, at 5:45 pm Monday.

PAGASA earlier said that the center of the tropical storm would be closest to Manila between 10 pm and 11 pm Monday, as it crosses Cavite province. (WATCH: Manila evacuates thousands as #RubyPH nears)

Storm surges up to 1 meter high are still possible. With the effect of the high tide past 10 pm, some areas might experience flooding. (READ: High tide to aggravate Ruby impact in Metro)

The next weather bulletin will be issued at 5 am Tuesday. – Rappler.com