Roxas on viral motorcycle-riding photo: ‘I did my job’ 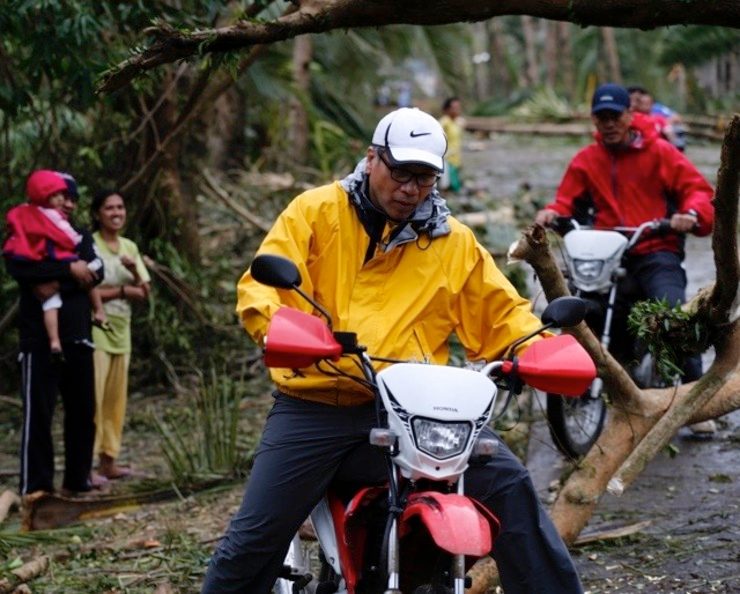 MANILA, Philippines – Department of the Interior and Local Government (DILG) Secretary Manuel Roxas II brushed off criticism for his decision to ride a motorcycle to reach Typhoon Ruby (Hagupit)-hit towns in Eastern Visayas.

“I was simply doing my job which is getting to ground zero as quickly as possible. All other comments are irrelevant,” Roxas said in an interview with the ABS-CBN News Channel on Tuesday, December 9.

A photo of Roxas riding – and falling off – a motorcycle on his way to far-flung Eastern Samar towns went viral the past few days.

His supporters lauded the DILG chief for his efforts while some criticized Roxas for not wearing a helmet during the trip.

Roxas is currently in Eastern Samar to lead government’s post-Ruby “National Frontline Team.” The DILG chief flew to Borongan, Eastern Samar days before Ruby was expected to make landfall there.

The storm changed paths at the last minute and instead made landfall in Dolores town, some 60 kilometers north of Borongan.

On Tuesday, Roxas explained the frontline team needed to reach Dolores right away. Power was out in the province and communication lines were down.

“About 20 km into the trip, the trees were just too numerous and we could not get through anymore by van or jeep. I just made the decision of borrowing the motorcycles of the people in the barangay we were stuck in,” he said.

In the aftermath of last year’s Typhoon Yolanda (Haiyan), some local chief executives also found that motorcycles were the only way to navigate through debris left behind by a powerful storm.

“I did my job. I got to ground zero. That’s all there is. If it required walking, if it required motorcycle, whatever is required [I would do it],” added Roxas.

Some 804 evacuation centers are still occupied in the entire region, housing some 93,000 families, said Lacierda, who flew into the province alongside with Roxas.

Lacierda said Eastern Samar was “now past the emergency phase” and that the team had begun collating reports on damage caused by Ruby “in order to begin the process of building back better.”

Roxas also urged the public to shift its focus from him to the task at hand.

“There are 12 people who have died. There’s no power, cell service was just restored, there’s no water, about 15 towns have been badly hit, tens of thousands of people are in evacuation centers, and that’s all that they can talk about?” said Roxas. – Rappler.com