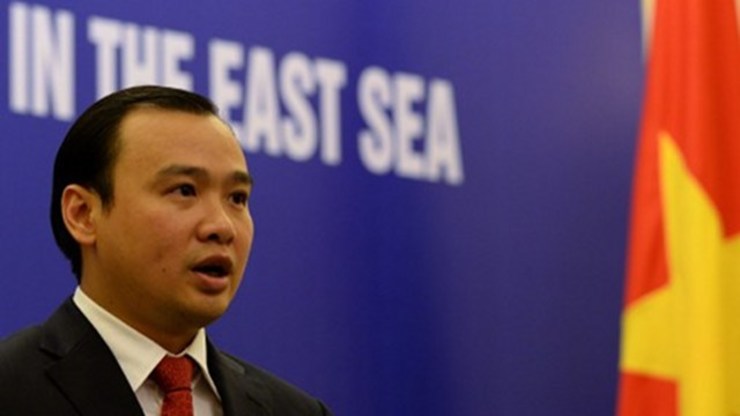 Vietnam’s Ministry of Foreign Affairs made the announcement on Thursday, December 11, in response to questions on its stand about China’s position paper rejecting the arbitration case.

“To protect its legal rights and interests in the East Sea (Vietnam’s name for the South China Sea) which may be affected in the South China Sea Arbitration case, Vietnam has expressed its position to the Tribunal regarding this case, and requested the Tribunal to pay due attention to the legal rights and interests of Vietnam,” the ministry’s spokesperson Le Hai Binh said.

Like the Philippines, Vietnam is also questioning China’s controversial 9-dash line, which Beijing cites to justify its claim over practically the entire sea. The 9-dash line is the main claim in the Philippine arbitration case, where Manila argues that it is inconsistent with the United Nations Convention on the Law of the Sea (UNCLOS). Last week, the US also released a study questioning the legal basis of the line.

Yet Vietnam asserted its claims over the Spratly Islands, which the Philippines is also contesting.

Binh reiterated that Vietnam has “full historical evidence and legal foundation” to reaffirm its sovereignty over the Paracel Islands (Hoang Sa for Vietnam), and the Spratly Islands (Truong Sa for Vietnam), “as well as other legal rights and interests” in the sea.

“It is Vietnam’s consistent position to fully reject China’s claim over the Hoang Sa and Truong Sa archipelagoes and the adjacent waters, as well as China’s claiming of ‘historic rights’ to the waters, sea-bed and subsoil within the ‘dotted line’ unilaterally stated by China,” said Binh.

Manila has no claims over the Paracel Islands, and only focused its arbitration case on the waters surrounding the Spratly Islands and Scarborough Shoal, which Beijing seized in 2012.

Vietnam’s announcement means Hanoi wants The Hague-based tribunal to also consider its position on the dispute.

Philippine Department of Foreign Affairs Spokesperson Charles Jose said in response, “We are studying Vietnam’s submission and its possible implications.”

The Philippines has been urging Vietnam and other claimant countries to join its arbitration case against China.

Vietnamese Prime Minister Nguyen Tan Dung earlier threatened to take legal action against China after Beijing placed an oil rig in an area near the disputed Paracel Islands last May. The move sparked the worst breakdown in Sino-Vietnamese relations since the two neighbors fought a border war in 1979.

“We are prepared and ready for legal action. We are considering the most appropriate timing to take this measure,” Dung told Bloomberg in May.

Vietnam’s announcement comes days after China released its position paper ahead of a December 15 deadline for Beijing to respond before the tribunal. In a 28-page paper published over the weekend, Beijing claimed the tribunal has no jurisdiction over the case, reiterating that it prefers to settle the dispute bilaterally.

In response to Vietnam’s announcement, Reuters reported that China’s foreign ministry released a statement late Thursday calling on Vietnam “to respect China’s sovereignty.” Beijing said it will not change its refusal to participate in the case.

Malaysia, Brunei and Taiwan also claim parts of the South China Sea, believed to hold vast deposits of oil and gas, and the site of the world’s busiest shipping lanes.

‘United, we will win’

In a previous interview with Rappler, Vietnamese Ambassador to the Philippines Truong Trieu Duong said his country shares the Philippines’ concerns about China’s growing aggression in the sea.

“We’ve got to be united, and stand united. We will win,” Duong said in May.

Duong said Vietnam viewed the oil rig incident as a provocative act, unlike China’s past moves where Beijing used smaller oil rigs for a shorter period of time.

In the latest incident, he noted that a huge number of ships even escorted the oil rig. China also knew “that this kind of activity would be met with protests, strong protests, from Vietnam as well as other countries, even the US.”

Duong branded the 9-dash line as a “newly born idea” that “has been rejected by almost all countries, all claimants.” (READ: Top Philippine judge uses Chinese maps vs China)

He said: “This act, I think, has been carefully considered, carefully calculated, and is a very, very serious act for China to realize its dream of a 9-dash line….It’s different from other acts before…just claiming, you know, some islands, things like that. But here, it is claiming the whole South China Sea.”

Philippine Foreign Secretary Albert del Rosario has said that Vietnam was considering a possible arbitration case, and “they may try to consult with us.” – Rappler.com