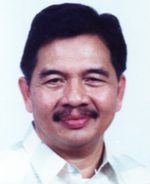 MANILA, Philippines – Cotabato City Vice Mayor Muslimin Sema on Tuesday, January 10, was shot in Cotabato City and brought to the Notre Dame hospital where he was declared out of danger.

Initial reports from Cotabato City said that a motorcycle-riding gunman fired at Sema’s Mitsubishi Montero on Gonzalo Javier St., Rosary Heights 7, Cotabato City shortly past 11 am. They were on their way home after attending a local council session.

Sema’s aides shot back, hurting the suspected triggerman identified by the police as Zermin Abdullah, who is now at the Cotobato Regional Medical Center. The driver of the motorcycle apparently got away.

Sema’s neck was slightly wounded, according to local authorities.

Sema once served as mayor of Cotabato. His wife, Bai Sandra Sema, is representative of Maguindanao’s 1st district and Cotabato City. She’s in Manila as of this story’s posting at 2 pm.

Only last month, in December 2011, a roadside bombing in Datu Odin Sinsuat town in Maguindanao, killed two and wounded another. Rep. Sema was with other provincial officials in the town at the time of the bombing.

A former guerrilla of the Moro National Liberation Front (MNLF), Sema is at present chairperson of the MNLF central committee.

The MNLF signed a peace agreement with the Ramos administration. The peace deal paved the way for the entry of ex-Moro guerillas, like Sema, into politics.

Sema and wife have been caught in political squabbles with local candidates and clans, however. – Rappler.com