Jan 7, 2015 8:39 PM PHT
Michael Bueza
Facebook Twitter Copy URL
Copied
The Citizens for Clean and Credible Elections (C3E) is not buying the Comelec's explanation about the cost of PCOS refurbishment, which could reach P2 billion 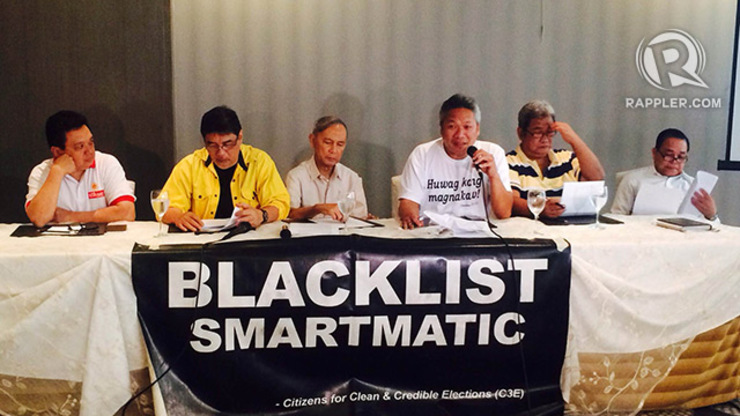 MANILA, Philippines – A poll watchdog is preparing to file a case opposing the P300-million agreement between the Commission on Elections (Comelec) and Smartmatic.

The deal involves the conduct of diagnostic tests by Smartmatic on the precinct count optical scan (PCOS) machines that will be reused for the 2016 elections.

The Citizens for Clean and Credible Elections (C3E) on Wednesday, January 7, also assailed the huge amount that the Comelec would spend for the entire refurbishment process, which could reach P2 billion.

Despite numerous issues brought against Smartmatic-TIM and the PCOS machines in the past, the C3E said that the Comelec “has continued to favor” the company. (READ: Why Smartmatic got deal for PCOS repairs)

“We are exhausting all venues for action and will be filing a case at the Supreme Court to seek the cancellation of the refurbishment contract with Smartmatic,” announced lawyer Melchor Magdamo of the C3E.

The C3E added that they plan to do so after obtaining a certified true copy of the resolution and a copy of the actual contract.

This will be the third case the group is preparing to file before the Supreme Court. It is also set to file two complaints next week to blacklist Smartmatic in future election-related projects due to issues in past automated polls

Their earlier petition before the Comelec bids and awards committee was junked in December.

Repairs ‘cost too much’?

The Comelec has explained that Smartmatic proposed a P1.2-billion extended warranty deal for the refurbishment of the PCOS machines – P300 million for the inspection and diagnostics, and P900 million for the actual repairs afterwards, which could be bidded out to other companies.

It may also choose to pay P800 million for PCOS upgrades, in the event that Smartmatic would bag a separate contract for 23,000 additional PCOS units, so that the functionalities of the existing and new machines would match. This would bring the PCOS repairs price tag to P2 billion.

But the C3E wasn’t buying the poll body’s explanation.

IT expert and C3E co-convenor Hermenegildo “Jun” Estrella Jr argued that the cost even just for the diagnostics was too much. Dividing the P300-million price with the 82,000 existing PCOS machines, Estrella asked, “Will it cost you around P3,000…just to diagnose one machine?”

Even subtracting the P300 million for the diagnostics, the remaining amount for repairs and possible upgrades – or P1.7 billion – is almost the same as what the Comelec paid to buy the PCOS machines in 2012 (for P1.8 billion).

He also believed that with the awarding of the first contract to Smartmatic, it would pave the way for the company “to have the advantage in securing the next two contracts” even if it was put up for public bidding.

“Kayo ba ay magtitiwala sa taong harap-harapan kayong niloloko?” Estrella asked. (Would you trust a person that has been fooling you straight to your face?)

In response, Comelec Chairman Sixto Brillantes Jr said, “The filing of cases by anybody who has some interest [with the issue] is a prerogative of anybody.”

But Brillantes called groups like the C3E not as watchdogs but “attack dogs.”

“Sana imbes na nag-iingay lang sila, pumupunta sila rito at mag-usap kami, mas maganda sana,” said the poll chief. (I hope that instead of making noises outside, they should go here in the Comelec office and discuss it with us.)

Brillantes will be retiring from the Comelec along with two other commissioners on February 2, 2015.

Smartmatic also blasted the group, which it said are among those masquerading as cause-oriented groups but are “merely fronts for vested-interests who either want the contract for themselves, or are pushing for a return to manual elections.”

In a statement on Wednesday, Smartmatic Asia Pacific president Cesar Flores said that these groups “have tried again and again, and have failed to derail automation.”

“Beyond their speculations, these groups have failed to prove any one of their far-fetched accusations, and the fact remains that the 2010 and 2013 automated elections were transparent and accurate – feathers in the caps of both the Comelec and the Filipino nation,” said Flores.

“While we do not begrudge anyone the right to express their opposition to the contract, we trust the courts will once again uphold the wisdom of the Comelec to award the mission-critical task of maintaining the PCOS machines to its the rightful manufacturer and the only legitimate source of original spare parts,” Flores added. – Rappler.com