Acting PNP chief Deputy Director General Leonardo Espina said that “some police commandos” were killed in a series of clashes that began in the early hours of Sunday, but did not give details. “We mourn the loss of some police commandos of the PNP-SAF who offered the supreme sacrifice for peace,” he said in a statement released shortly past 9 pm.

“I extend my deepest sympathy to the orphaned families of our fallen policemen,” Espina said. “They died a meaningful death on the side of justice and righteousness. They did not die in vain.”

Espina did not elaborate, citing “sketchy” information from the field. “What we know so far is that there is an ongoing operation in the area against a high-value target believed to be behind the recent spate of bombings in Central Mindanao,” he added.

Initial reports on Sunday noon from two Rappler sources said that the SAF teams conducted “law enforcement operations against [a] high value target” in Mamasapano town, Maguindanao, at 2:30 am Sunday. The SAF troops were backed up by policemen from the regional headquarters of the Autonomous Region in Muslim Mindanao (ARMM).

“There are still ongoing efforts to extricate the fatalities from the scene of the encounter,” a municipal councilor, who asked not to be identified, told reporters past 6 pm Sunday.

The military also confirmed there were casualties but did not say how many.

“The AFP helped the PNP in extricating police casualties of this morning’s encounter while the PNP conducted operations against lawless elements and in carrying out a warrant of arrest,” said Lt Col Harold Cabunoc, head of the military’s public affairs office, in a statement past 7 pm. “No military units were involved in the fighting,” he stressed.

Espina said they will evaluate what happened. “The priority concern at the moment is the medical evacuation and treatment of the wounded and extraction of the casualties from the battle zone,” the acting PNP chief said.

There are conflicting accounts on the exact number of dead.

Reports reaching the office of Interior and Local Government Secretary said there were 26 SAF casualties.

Initial reports on Sunday noon from two Rappler sources said that as of 7:30 am, at least one SAF member was wounded. “There was [a] heavy firefight and the SAF troopers suffered casualties,” the same reports added.

The PNP asked for reinforcement from the military.

Petinglay, spokesman of the military’s Maguindanao-based 6th Infantry Division, said military vehicles were deployed near the encounter site but said it’s not clear if they were able to get in.

As of 3 pm, the SAF teams remained trapped in Barangay Tukanalipao, Mamasapano, according to a police report sent via text message to reporters.

On Sunday afternoon, Abu Misry Mama, spokesman of the BIFF, said that the BIFF’s 1st Brigade intercepted the reinforcement from the military at around 9 am.

Intelligence sources disclosed that the operation was meant to hunt down a top Jemaah Islamiyah (JI) terrorist in the area, alleged Malaysian bomb maker Zulkifli bin Hir, better known as “Marwan,” who is in the Most Wanted Terrorists list of the US Federal Bureau of Investigation. He has a US$ 5 million bounty on his head. 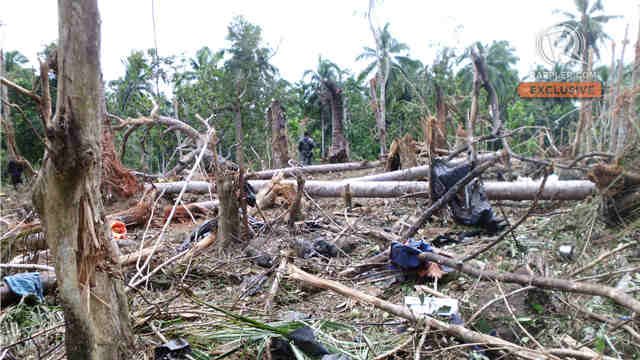 Marwan, who is believed to have been residing in Mindanao since 2003, was the target of a military airstrike in February 2012.

He survived the attack but the Philippines declared back then that he was killed in that operation. (READ: After 2 years, PH military says ‘killed’ terrorist leader likely alive)

On Sunday, President Benigno Aquino III was also in Mindanao – in Zamboanga – to inspect the security situation in the city following a car bomb explosion that claimed two lives and hurt at least 48 last January 23.

Congress is deliberating a proposed new law that will create the future Bangsamoro region that is expected to have more muscle than the ARMM. But this would still be subjected to a plebiscite.

The firearms would not be decommissioned in one go. A specific number of weapons would be turned over as political commitments towards the creation of the proposed Bangsamoro autonomous region are achieved. (READ: Real peace means the guns would have to go away) – with reports from Carmela Fonbuena, Richard Falcatan, Karlos Manlupig, Bea Cupin and Agence France-Presse/Rappler.com