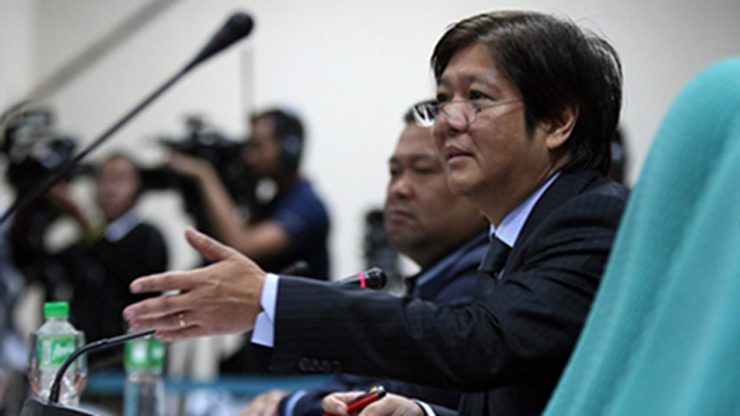 A related hearing focusing on the constitutionality of the measure led by Senator Miriam Defensor Santiago, head of the Senate committee on constitutional amendments, pushed through Monday.

Marcos is handling the main committee tackling the law but Santiago is also leading her own hearings to tackle the legality of the measure.

Marcos was scheduled to hold hearings in Jolo and Zamboanga next week. Meanwhile, another hearing under his committee set for Tuesday, January 27, will push through.

President Benigno Aquino III earlier said the passage of the law is his priority this year. The best-case scenario for the government is for the law to be passed this year so that a plebiscite may be held soon after and elections for the new region would happen before the President steps down in June 2016.

But the Sunday attacks, which happened on the of the 24th founding anniversary of the Philippine National Police, now threaten to delay this timetable.

Marcos was noncommittal when asked whether Senate can still beat the March deadline with the recent developments.

He said his committee can not complete the report without conducting the scheduled hearings in Mindanao.

“I decided to suspend indefinitely all discussions and hearings related to the passage of the Bangsamoro Basic Law until this is clarified. We cannot in conscience, proceed with these hearings while a cloud of serious doubt hangs over the security situation in the south. A peace agreement cannot be legislated under the threat of such extreme violence. Violence has no room in a civilized society,“ Marcos said.

“What I can say is this is really a big glitch in the peace process. This is not a joke and this is not a small thing. We can’t just continue as if nothing happened, ” Marcos said.

“Fifty policemen died. We can’t just sweep it under the rug,” he added.

“We don’t just stop because we have this setback. We see a greater reason why we have to strengthen mechanisms. We still need to find long-term solutions to the conflict in Mindanao,” Ferrer said.

Santiagosaid suspending hearings would be counterproductive but warned against making the clash as an excuse to fast-track the measure.

“What was the real cause of that firefight? Others say it’s lack of coordination. Others surmise it was a fight over the cash reward. We don’t know what happened there. So, in fact, hearings should continue with even more vigor,” Santiago said.

“It can not be used either as an argument that we have to act quickly on the BBL because that would be to railroad and the product of a juggernaut is always regrettable,” she added.

At the House of Representatives, members of the ad hoc committee on the Bangsamoro suspended their afternoon meeting as a sign of respect to the policemen killed in the encounter.

House members are scheduled to conduct executive meetings until the first week of February.

The law needs to be passed in Congress and in a plebiscite before the new Bangsamoro government can be established. – Rappler.com