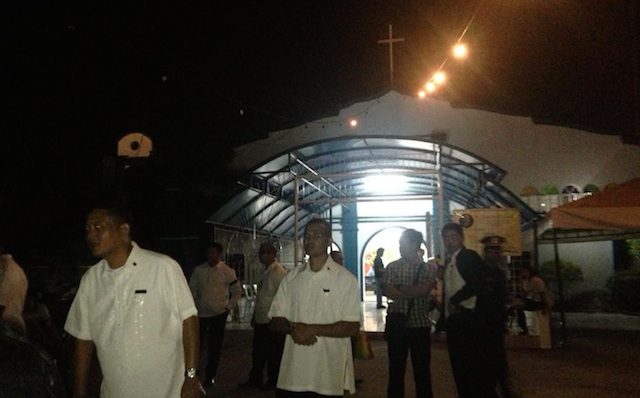 Facebook Twitter Copy URL
Copied
(UPDATED) President Benigno Aquino III leaves Camp Bagong Diwa around 1 am on Saturday after a heart-to-heart talk with the families of the 44 SAF troopers killed in Mamasapano, Maguindanao on January 25

MANILA, Philippines (UPDATED) – President Benigno Aquino III spent more than 12 hours in Camp Bagong Diwa, Taguig, on Friday, January 30, to talk to the families of the fallen Special Action Force (SAF) troopers and those who were wounded in the bloodbath over the weekend.

The President arrived at the camp shortly before 10 am Friday for the necrological rites for the slain elite cops. He saw grief – and anger. (READ: The women they left behind)

The President first gave them a donation of P250,000 from the Presidential Social Fund before he spoke to them one by one, according to Speaker Feliciano Belmonte Jr, who accompanied the President inside the St Joseph Parish chapel. (READ: Aquino vows justice for SAF 44: ‘We will get Usman’)

“He was able to talk to representatives of all of the 44 families. I want to emphasize lahat nakausap niya (he talked to all of them), including several of the injured,” said Belmonte.

Earlier in the day, in his message to the families, the President vowed that Abdulbasit Usman, one of two top terrorists targeted by the botched Maguindanao operation, would be caught. Usman escaped while the other target, Jemaah Islamiyah terrorist Zulkifli Abdhir or better known as “Marwan,” was reportedly killed.

“You know me: if I give my word, I will keep it….I assure you that we will catch Usman,” the President said in Filipino, adding that this task is on the top of his list.

Before the President personally talked to the families, Belmonte said a “preliminary interview” was conducted to get information such as the size of their families, age of their chidren, the livelihood of the family, and if the SAF widows have jobs.

Rappler also saw Senator Grace Poe at Camp Bagong Diwa Friday night. She came to visit the remains of the SAF troopers ahead of the Senate probe that she called on the Mamasapano clash.

She defended the President who got flak for skipping the arrival honors for the SAF troopers at the Villamor Air Base on Thursday, January 29.

“I believe that the President is sincere. He’s been here since 10 am. I think that counts for much,” said Poe. She joined calls for justice. “It’s devastating when you look at their faces and when you look at their families. Can you just imagine these young men with a bright future ahead of them. They were really hit hard during battle. You can stil see how deformed their faces are. It’s just really disheartening. I can imagine that what they really want is justice and to find out who should be responsible for this,” said Poe. (READ: Inside story: SAF asked military for fire support)

The President also spoke with the SAF troopers wounded in the operation to hunt down Marwan, who has a $5-million bounty on his head. The President earlier said Marwan was reportedly killed in the incident; government is awaiting confirmation after DNA tests.

Before leaving the camp, the President also met all the SAF troopers who were asked to assemble at the SAF grounds. The camp is the main headquarters of the elite force. – Rappler.com