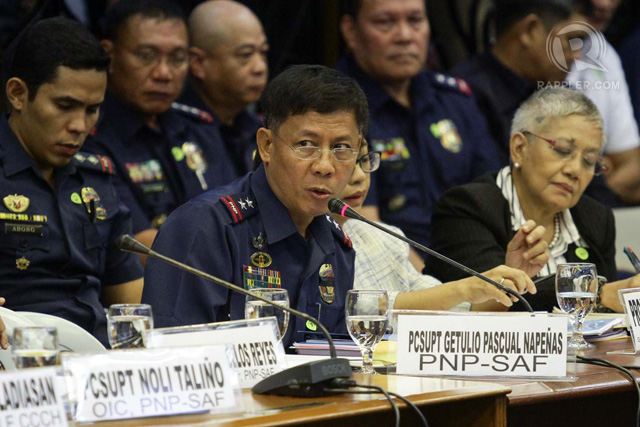 This was revealed by relieved PNP Special Action Force (SAF) commander Police Director Getulio Napeñas during the Senate hearing on the clash in Mamasapano, Maguindanao, on Monday, February 9.

During the Senate’s first hearing on the ill-fated “Oplan Exodus,” the PNP SAF’s operation to neutralize Marwan, Napeñas said that, in January 9, 2015, he joined Purisima and Intelligence Group Director Senior Superintendent Fernando Mendez in briefing President Benigno Aquino III on the operation.

The briefing took place in Bahay Pangarap, the President’s residence inside the Malacañang compound. It would be the last briefing before the PNP SAF launched “Oplan Exodus” in Mamasapano town – their last operation against Marwan.

The operation resulted in the death of Marwan and of 68 others, including 44 troopers from the PNP SAF. The incident has exposed cracks within the PNP’s chain of command and between the PNP and the Armed Forces of the Philippines.

“Under Oplan Exodus, coordination with the AFP will be time-on-target, in order to avoid another compromise,” said Napeñas. He earlier explained that several previous operations against Marwan were aborted due to different reasons: the military did not commit to sending reinforcements or enemy combatants were able to intercept them early in the mission.

Absent from the January 2015 briefing were Deputy Director General Leonardo Espina, who by then was the officer in charge of the PNP following Purisima’s suspension. Interior Secretary Manuel Roxas II, a political ally of the President and chairman of the National Police Commission, was also not at the briefing.

Napeñas said Purisima told him not to bother informing other security officials, since he would do so himself. “Huwag mo munang sabihan ‘yung dalawa, saka na ‘pag nandoon na. Ako na bahala kay General Catapang,” Napeñas quoted Purisima as saying. (Don’t inform the two yet, just tell them when the troops are in the area. I’ll tell General Catapang myself.)

Asked to clarify his statement, Napeñas said the “two” that Purisima was referring to were Espina and Roxas. Catapang refers to Armed Forces of the Philippines chief General Gregorio Catapang.

At the time of the January 2015 briefing in Bahay Pangarap, Purisima was still serving a suspension order issued by the Ombudsman over a corruption case. Purisima eventually resigned as the PNP’s top cop almost two weeks after the Mamasapano operation.

While serving the suspension order, Purisima should not have had any engagements in the PNP. It’s one of the pressing questions that needs to be answered in the face of the bloodiest days in the PNP’s history: Why was a suspended police official part of the chain-of-command?

Before 2014 ended, the SAF was already preparing for Oplan Exodus: communication systems were put in place in Maguindanao, civilian trucks rented for the entry of troops, police officials flew to Zamboanga to further plan the mission, and equipment was prepared.

“It is clear that contrary to the unverified reports, the PNP did its best in the preparations and in the planning of our operations against Marwan and Usman,” added Napeñas.

During an interpellation by Senator Antonio Trillanes IV, Napeñas admitted he viewed Purisima as the “focal person” in “Oplan Exodus” since he was “constantly being asked by the President on the mission.”

Purisima and Aquino are close friends, tracing their relationship back to the 1980s.

“This was manifested by the fact that the President consulted with [Purisima] during the presentation,” said Napeñas, referring to the Bahay Pangarap meeting. Napeñas said that he deferred to Purisima’s call despite the latter’s suspension since “he was the one consulted by the President and had the intelligence packet.”

Napeñas said that despite Purisima’s “advice” not to inform both Roxas and Espina, it was his call in the end. “I was the one in command,” said the relieved general when asked who was calling the shots in Mamasapano.

He added, however, that Purisima was “giving vital information during the operation.” Asked by Trillanes if Purisima’s input was detrimental to the operation, Napeñas said: “Hindi nakagulo, nakatulong ‘yung information na binigay sa amin (His instructions didn’t confuse us, they helped us.)”