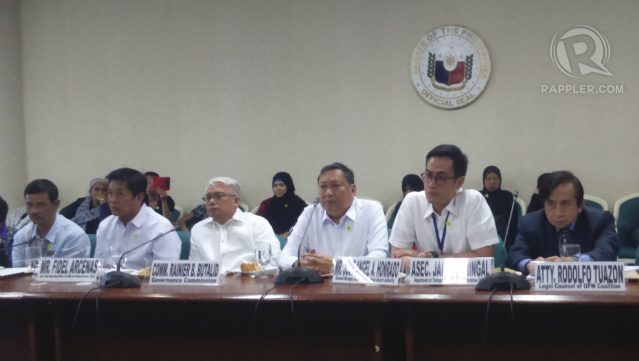 Honrado told a Senate committee he “will not recommend” the proposed suspension but will “convey it to the MIAA board,” upsetting migrant workers’ groups present during the legislative hearing.

He said the decision to stop the terminal fee integration, which affects overseas Filipino workers (OFWs) who will buy tickets online and abroad, is up to the entire MIAA board.

Senators called for the suspension of terminal fee charges in airfares, pending a system that can identify OFWs when buying plane tickets abroad and online.

All 4 senators present during the hearing sided with pro-OFW groups in opposing the MIAA move.

There are 10 million Filipinos working or living overseas. President Benigno Aquino III envisions “a government that creates jobs at home so that working abroad will be a choice rather than a necessity.”

Cayetano insisted on a system that would assign a code to each OFW for his or her exemption to be honored even online.

Technology strategist John Dennis Poyotas from Microsoft Philippines said such a system is possible, but failed to provide the estimated costs of developing the technology.

In a letter to Senate President Franklin Drilon, Labor Secretary Rosalinda Baldoz disclosed that her department had already proposed a data-sharing scheme to enable the automated identification of registered OFWs.

Citing a reply-letter from the MIAA, she said the proposal was rejected by some airlines, without naming which ones.

Socorro Gonzaga, who was present during the Monday hearing to represent the Philippine Airlines (PAL),  said they will comply with whatever system the government comes up with. Asked by Cayetano if the proposed automated technology is possible, Gonzaga said they will work with their systems provider to help develop it.

“Ang turo ng tatay ko, ang isang public official, siya mismo yung yumuyuko sa sinisilbihan niya,” Ople added. (My dad used to say that a public official is the one who bows to those he serves.)

Her late father Blas Ople, a former labor minister, was among the senators who co-authored the Migrant Workers Act of 1995, which provides OFWs exemption from terminal fee payment.