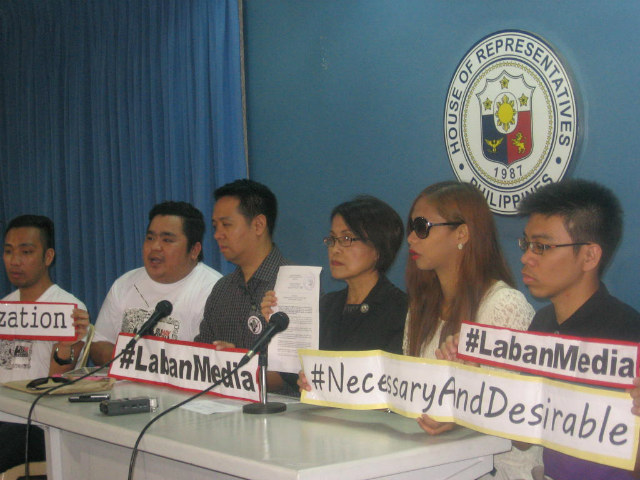 The 3 filed House Resolution 1893, calling for an investigation in aid of legislation into the alleged labor violations committed by GMA-7.

The network considers its so-called talents as independent contractors despite their years of exclusive work with GMA-7.

Talents are technical and creative runners behind GMA-7’s top-rated news and public affairs programs, where the program administrator and program manager are typically the only regular employees.

The lawmakers’ support affirms TAG’s anti-contractualization mission in the media industry, a movement slowly gaining momentum in social media with the hashtags #BuhayMedia (Life in Media) and #LabanMedia (Media Fight). The movement has also gotten a boost from university tours across Metro Manila.

A nationwide network of college-level editors as well as respected officials and faculty-members of the country’s premier state university have also rallied behind TAG’s efforts to reform, if not abolish, the talent system.

The talent system is not exclusive to GMA-7 but is practiced in most television networks. Protesting groups allege it is meant for the big-time networks to maximize profit at the expense of its laborers.

In 2014, two batches of regularization cases were filed before the National Labor Relations Commission (NLRC) against GMA-7.

Both cases involve TAG members who have risked their jobs suing their employer in pursuit of industry-wide reforms.

TAG President Christian Cabaluna believes the present exploitative system has lingered for so long that many media practitioners have accepted it as the norm, which he said, should not be the case.

Not all initial TAG members chose to pursue the controversial labor suit, after some of them chose to accept a talent contract falling short of regularization to keep their only source of income.

In documents submitted to the NLRC, GMA-7 denied any employer-employee relationship it has with its talents.

Talent agreements – which involve a fixed-term employment – were signed “knowingly, freely, willingly, and voluntarily” by the network talents, it said.

But Reel Time executive producer Ely del Rosario said talents are basically a ready set of people the network can tap for any other coverage plans their contracts do not cover, including election coverages, special reports, and breaking news.

“The clear mandate to promote regular employment is often circumvented by contractualization and miscategorization of employment,” read the resolution filed Monday.

Rappler has repeatedly sought over a series of stories the comment of GMA-7 on the matter, and has been repeatedly told the network prefers to engage TAG before the NLRC, which it says, is the “proper forum.”

On the last day of December 2014, 52 GMA-7 talents and TAG members lost their jobs after refusing to sign a revised year-long but still project-based contract with the network.

Citing GMA-7’s difficulty in filling the vacancies, TAG announced on Monday that its sacked members were offered back their jobs.

Without the network’s commitment to their regularization, the protesting talents, all with cases before the NLRC, refused to take the offer.

“TAG is convinced that this latest move by the Management only proves that talents are desirable to the network; and desirability is one important qualification to be a regular employee,” the group said in a statement. – Rappler.com