The front lines of Mamasapano Facebook Twitter Copy URL
Copied
When he is found on the cornfield where elite cops clashed with rebel forces in Mamasapano town, farmer Badrudin Langalan was lifeless, face down on the ground, his arms bound behind him

MAMASAPANO, Philippines – They are waiting in the south.

The air is tense. They say the peace is not holding. There is talk of skirmishes along the border, of base commanders growing anxious. The roads are lined with tarpaulin signs begging officials to hold off on politicking. Senators are quoted and misquoted over lunch. Word has spread even to quiet Moro villages, to Barangay Tukanalipao in Mamasapano town. They know about the cacophony in Manila. They know about the screaming in Congress and the accusations in the Senate. They have been told about the angry posts online. They see policemen held up as martyrs. They ask why their own dead do not matter.

They have discovered an odd thing – that men and women they do not know and have never seen are now demanding the massacre of their people.

Past the checkpoints of grim-faced soldiers is Mamasapano town, where the water pumps yellow and fields go dark with the sun. Mamasapano is where 20-year-old Sarah Lawani-Langalan was born, married, and finally widowed.

All she will say is that at dawn on the 25th, after he prayed, Badrudin Langalan stood up from the hut floor to tell her he was leaving for the market to charge his phone. (READ: Timeline Mamasapano clash)

When the shooting began, Sarah did not think of her husband. It was her children she gathered. They left their hut in the dark, running, cowering in the dirt at the sound of gunfire, then running again. At noon, she found shelter. It was dark when she called her parents looking for her husband. (READ: Civilians killed in Mamasapano)

Her parents asked the neighbors, called Sarah to ask her what her husband was wearing when he left.

A long-sleeved shirt, she said, and a pair of black shorts. He was on a bicycle. He was carrying a backpack. He had a flashlight.

It was Sarah’s mother who told her Badrudin was dead. Dead and buried, the body with the broken face identified by his cousins after he was scraped off the bloodied cornfield, his arms bound, his face to the ground.

It is not certain why.

It is what angers her, only she does not know whom she should be angry at. All she wants is for this never to happen again. 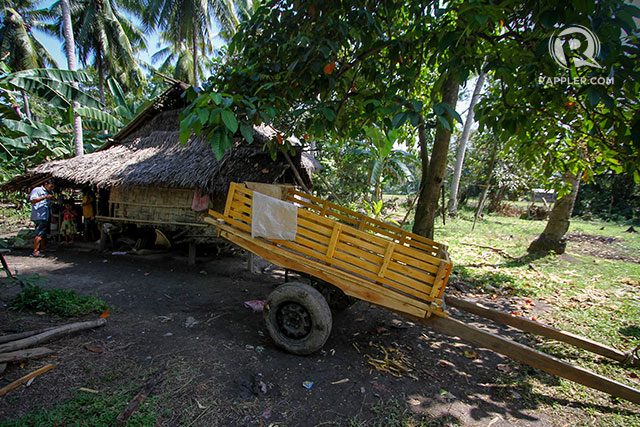 The people of the Moro villages are afraid of many things. Of the night, and what can happen in the dark. Of men in uniform, and what they may be willing to do. They worry about the fields they cannot harvest, the bananas they cannot sell, the homes they cannot return to.

They are afraid of many things, but mostly this – that the north will let loose the dogs of war, and that their children will pay the price.

This is Mamasapano, where the sun is brutal and the rivers burn white, home to men who are sometimes called revolutionaries, sometimes called terrorists, and the site of what may or may not have been a massacre, or a misencounter, or a failure of governance. Here, the bamboo bridge is pocked with bullet holes; one log  has fallen into the water.

This is where a 15-year-old boy who left home to check on the livestock was shot in the chest with a stray bullet. This is where an 8-year-old girl crouching with her parents was killed in the crossfire, and where the 3-year-old daughter of Sarah Langalan runs terrified at the sight of men in uniform.

Sarah did not want to tell her daughter that Badrudin was dead, but she found out anyway.

Run, says the small girl, run quick. The soldiers might kill you, like they killed my Papa.

The south is waiting, and they are afraid. – Rappler.com