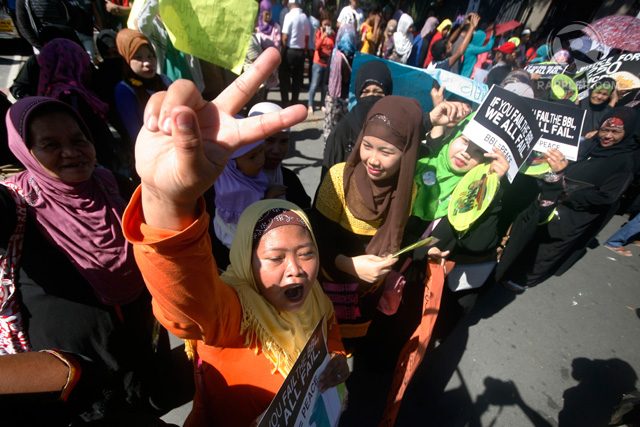 MANILA, Philippines (UPDATED) – Amid the beating of war drums, Congress leaders on Monday, March 2, set a new deadline for the passage of the proposed Bangsamoro Basic Law by the end of the 2nd regular session in June.

Senate and House leaders agreed on the deadline during the monthly meeting for their legislative agenda on Monday morning at Club Filipino, Senate President Franklin Drilon told reporters.

Speaker Feliciano Belmonte Jr told reporters that Congress has no choice but to continue with deliberations on the proposed law – if the alternative means waging war again in Mindanao. (READ: Should peace be contingent on the BBL?)

Belmonte, however, maintained that Congress cannot pass a bill that is not consistent with the Constitution.

In the aftermath of the clash in Mamasapano, Maguindanao, that killed 44 elite cops, 18 Moro rebels, and at least 3 civilians, both the Senate and the House postponed hearings on the measure, casting doubts on the future of the peace process.

The ad hoc committee on the Bangsamoro bill was supposed to resume deliberations, Tuesday, March 3, but it was postponed anew as the Board of Investigation (BOI) has yet to file its report. The BOI is expected to submit the report to Interior Secretary Manuel Roxas II on March 6.

Vice President Jejomar Binay, meanwhile, cautioned Congress against pushing for passage of the BBL just because there is a deadline.

(It should be ripened by what is happening. And this deal should be in accordance with the law, with the Constitution, and the sovereign authority of our country.)

To beat the June 30 deadline for the bill’s passage at the plenary, Rodriguez said the House should consider holding special sessions. When the 2nd regular session of Congress adjourns on June 12, lawmakers will only report back for work on July 26 for President Benigno Aquino III’s final State of the Nation Address.

“I will reiterate that we have to continue the peace process. Until we regain the trust of the people, this cannot succeed. To restore trust, we have to know the truth, what really happened,” he said.

Marcos still wants to hold committee hearings in Jolo and Zamboanga during the summer break.

Government chief negotiator Miriam Coronel Ferrer earlier said the panel hopes to pass the law before the filing of the certificates of candidacies for the 2016 elections in October.

BBL to be diluted?

Aside from running against a tight deadline, the BBL also faces dilution in Congress.

While proponents of the bill have stressed that the proposed Bangsamoro commissions would remain under the supervision of the national bodies, Rodriguez said most committee members are of the opinion that Congress “cannot intervene with the actuation of constitutional bodies.”

“It is the commission itself that should be deciding what to do there. They can make arrangements, but it should be the decision of the constitutional commissions,” he said.

Under the proposed law, the Bangsamoro police would remain under the Philippine National Police but the Bangsamoro chief minister would have operational control and supervision, as well as disciplinary powers, over the body.

But Rodriguez said that the committee is likely to delete the provision once deliberations resume. “We only have one national police,” he said.

Marcos, meanwhile, told reporters that when the Senate local government committee resumes hearings on the BBL, he would focus on how ceasefire mechanisms would be strengthened following the Mamasapano clash.