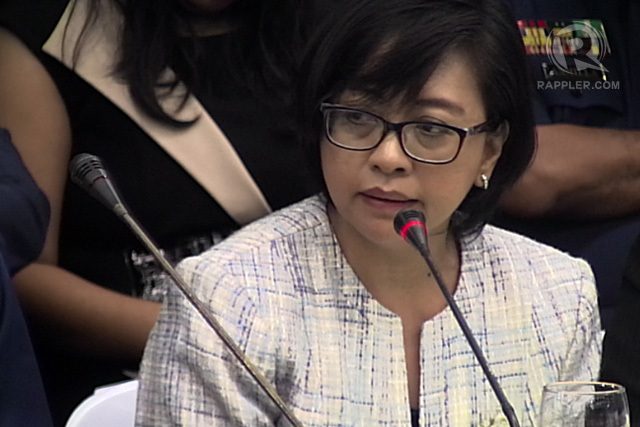 Facebook Twitter Copy URL
Copied
'These conclusions are being derived from a basic misreading or misrepresentation' of a provision in the proposed Bangsamoro Basic Law, says the government's chief negotiator with Moro rebels

In a forum on Thursday, March 5, Ferrer said there have been “top two trending lies” on the proposed law that have proliferated in the media in the past days. These are:

Ferrer said there is nothing in the bill that states that the Bangsamoro will get its own police force, much more its own army.

There is hereby created a Bangsamoro Police which shall be organized, maintained, supervised, and utilized for the primary purpose of law enforcement and maintenance of peace and order in the Bangsamoro. It shall be part of the Philippine National Police.

The Bangsamoro Police shall be professional, civilian in character, regional in scope, effective and efficient in law enforcement, fair and impartial, free from partisan political control, and accountable under the law for its actions. It shall be responsible both to the Central Government and the Bangsamoro Government, and to the communities it serves.

On the issue of block grant, Ferrer denied that the Bangsamoro government will get P75 billion under the proposed law, as earlier reported.

The block grant would allow the Bangsamoro government to get automatic appropriations without seeking the approval of Congress every year unlike the Autonomous Region in Muslim Mindanao (ARMM), which it seeks to replace.

Some House members have questioned the amount and the mechanism for the block grant, with others saying that the same arrangements should also be granted to other LGUs.

In a press conference Tuesday, March 3, Zamboanga City 1st district Representative Celso Lobregat said that while the block grant can be likened to the internal revenue allotment (IRA) for local government units (LGUs), it is more lenient.

“(The Bangsamoro budget) will be approved by Bangsamoro panel – not by Congress, not by anybody else. You can liken it to IRA but IRA is subjected to so many guidelines and regulations. There are many local government officials are complaining that we are supposed to be autonomous but there are so many guidelines from the DBM,” Lobregat said.

His computation includes the IRA of LGUs, which is automatically appropriated to LGUs under the law, as well as the budget of the regional arm of national agencies.

Ferrer on Thursday clarified that only about P35 billion would go directly to the Bangsamoro government – to be sourced from the block grant and two other funds to be granted to the region in its first year of operation.

The government peace panel estimates the block grant would amount to about P27 billion in 2016 – the target creation of the Bangsamoro – based on 2013 total revenue collections.

On the first year of operation, the Bangsamoro government will get a P7 billion special development fund and a P1 billion transition fund.

While the P70-P75 billion figure includes the IRA for LGUs, as well as money lodged in national agencies in the proposed Bangsamoro, the money will go directly to these units, not the Bangsamoro government, Ferrer said.

Besides, the P75 billion figure is “not a big deal” when compared to the P62-billion total budget that the ARMM got last year, said Senator Angara, who was also a guest in the forum.

Lawmakers should also note that the payment for the salaries of teachers is sourced from the ARMM budget since the jurisdiction over this was devolved to them, Ferrer said. In other LGUs, the Department of Education pays for teachers’ salaries.

Congress leaders agreed on a June timeline to pass the proposed law but deliberation in both chambers of Congress remain suspended in the aftermath of the Mamasapano clash. – Rappler.com