A tale of 2 impeachment trials

MANILA, Philippines – A popular movie star-turned-politician and a justice working in the cloistered halls of the Supreme Court. Just months ago, who would have thought Joseph Estrada and Renato Corona would have anything in common?

Using the lens of hindsight, veterans of the Estrada impeachment trial told Rappler their views on a process that leaders and the public will experience, take two.

Pimentel eventually resigned over the 11-10 vote against opening the second envelope, which the prosecution believed contained incriminating evidence against Estrada.

“I was apprehensive that if we did not open that envelope, people might suspect we are trying to cover up for Erap,” he said. “But I was not able to get the support of the majority of the Senate for which reason I resigned.”

Pimentel’s son, Koko, now sits as senator-judge along with key players in Erap’s trial. Then Speaker Manny Villar speedily led Estrada’s impeachment by reading a resolution after a prayer at the House of Representatives. Sen. Joker Arroyo wears a robe this time after heading the Estrada prosecution team as then Makati representative. 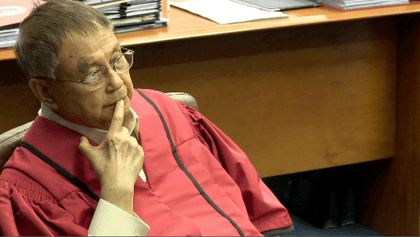 Mario Bautista, the lawyer who presented star witness Clarissa Ocampo, reprises his role as lead private prosecutor in the Corona trial. He is working with lawmakers or public prosecutors, many of whom are impeachment trial first-timers.

“We will look at the abilities of the lawyers on both sides because the cast of characters is a bit different. There are some who are the same but many of the lawyers are new.”

Pimentel said Estrada’s popularity and standing as an elected official made his trial emotionally charged.

“The Chief Justice is the top lawyer of the nation, head of the Supreme Court itself and so I cannot and will not expect an emotional outburst from the people over this impeachment trial.”

What Corona lacks in popularity he makes up for in legal prowess. Diokno said this is a key difference in his trial.

“Erap was not a lawyer. I don’t think he was privy to the strategy and formulation of tactics of the case. Whereas here, of course, the Chief Justice is aware of legal strategies and tactics, and I understand he is very much involved in his defense.”

Diokno also pointed out that the mystique of the Supreme Court may spark public curiosity in the case. Aside from revelations on the inner workings of the Court, questions on Corona’s properties tend to attract the public in the same way that Estrada’s mansions stirred controversy.

“I think people will still watch it maybe to the same extent as the Erap case,” he said.

Pimentel and Diokno said the impeachment rules still have many gaps. These include clarifying the kind of evidence needed for conviction.

“But the greatest danger really is the charge of betrayal of public trust because that phrase is so ill-defined. It has no definition as a matter of fact,” said Pimentel.

Diokno also said that with Corona on trial, questions must be raised on whether impeachment is the best way to hold top judicial officials accountable. He said a hanging question is what happens if the Supreme Court stops the impeachment trial and the Senate refuses to budge.

“Most of us and even I think the constitutional framers, they were looking at impeachment more in the sense of president, and vice president, not really the judiciary. Maybe we should think more of a way that will not cause a crisis if the different branches of government take a very hard stance.”

For all the flaws of the process, Pimentel and Diokno still support it. Diokno said the issues in the trial raise serious questions about transparency in government.

One is reforming the system of appointing justices, which he said has become susceptible to insider-trading. Diokno also urged the Supreme Court to review the resolution restricting the disclosure of justices’ Statements of Assets, Liabilities and Net Worth.

“They should lead the way because they are the ones who will resolve all cases, diba dapat sila ang model? (Shouldn’t they be the model?)

A popular movie star-turned-politician and a justice working in the cloistered halls of the Supreme Court. For people who played their parts in the Estrada impeachment trial, what the two have in common is the public’s ability to hold them accountable.