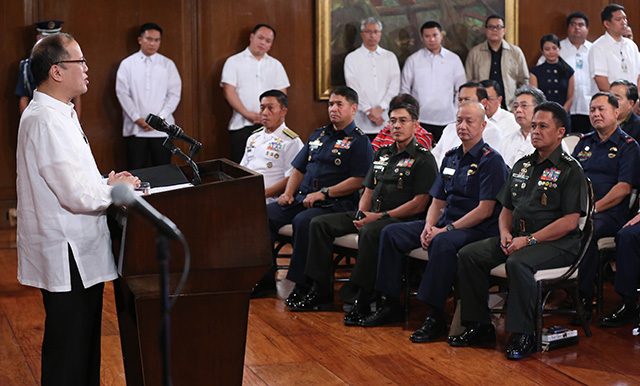 This was revealed in the Philippine National Police (PNP) Board of Inquiry (BOI) report on “Oplan Exodus,” a January 25 police operation in Mamasapano town, Maguindanao, that claimed the lives of at least 65 people, including 44 members of the PNP Special Action Force (SAF).

According to a section from the BOI report discussing the Bahay Pangarap meeting, Aquino had told police officials to coordinate with local military forces in the implementation of the operation which targeted bomb makers and terrorists Zulkifli bin His, alias “Marwan,” and Abdul Basit Usman.

Aquino, the report said “reminded the top officials to coordinate with the Armed Forces of the Philippines (AFP).” But all of the police officials present in the briefing – resigned PNP chief Director General Alan Purisima, sacked PNP SAF commander Police Director Getulio Napeñas, and Senior Superintendent Fernando Mendez of the PNP’s Intelligence Group – had “qualms” over involving the AFP.

This prompted the President to ask the men: “Wala na ba talaga kayong tiwala sa AFP (Do you have no trust left in the PNP)?”

Napeñas then answered: “With all due respect, compromised po ang AFP. Planning and preparation stages during big operations are compromised.”

“The President sat in silence, then directed the police officers to beef up the operatives who will be deployed for the high-profile and dangerous mission,” the report noted. Instead of just over 160, Napeñas eventually deployed close to 400 troopers in Mamasapano. (READ: Aquino’s contradictions)

But the instructions of the President following this exchange remain unclear. Napeñas and Mendez left the room, while Purisima stayed with the President.

It was this line, Napeñas told the BOI and a Senate probe, that led him to assume Purisima himself would be coordinating with the AFP.

The BOI, in the same report, however, noted that Purisima should not have been involved in the operation at all since he was then serving a preventive suspension order from the Ombudsman.

The BOI said it was Espina who had the authority to approve the operation. (READ: Purisima acted without authority)

Coordination with the AFP – or the apparent lack of it – is one of the sensitive issues that came out following “Oplan Exodus.” Military officers were surprised the morning of January 25 when reports of an encounter between SAF troopers and Muslim rebels in Mamasapano town started trickling in. The AFP said this lack of coordinate is why it was unable to sent in artillery support right away.

Espina will then be giving a copy of the report to Roxas, who in turn will submit it to Aquino.

Magalong said it will be up to Roxas to give clearance for the public distribution of the report. – Rappler.com