For Ina Raymundo and Dimples Romana, their 'Block Z' roles were quite the challenge

Senior citizens of Makati don't want a change in their city leadership, citing the many benefits they currently enjoy such as cash gifts and birthday cakes

BREAK. Senior citizen supporters of Mayor Binay take their snacks during the camp out at the Makati City Hall quadrangle on March 16. All photos by Mark Saludes/Rappler

MANILA, Philippines —Senior citizens were noticeably jubilant when the Court of Appeals handed down a a 60-day temporary restraining order (TRO) halting the changing of the guard at Makati City Hall on Monday, March 16.

In the middle of the crowd at the Makati City Hall’s quadrangle were the city’s senior citizens from different barangays, organizations and affiliations, cheering and dancing as they rejoiced the TRO on the suspension order against Makati Mayor Jejomar Erwin "Junjun" Binay Jr.

They have many reasons to celebrate, they said.

(We are well looked after here in Makati. Medicine is free, our hospitalization is important for the Binays. Why should we look for another mayor?)

With Balleser was 68-year-old Ligaya Noag, who told Rappler that her group brought extra clothing, blankets, and pocket books in anticipation of their long stay inside city hall.

(We came here prepared. Now that the TRO is in, we are okay. We can go home. But if they will insist on removing Junjun, we will come back.)

Makati City has more than 65,000 senior citizens registered at the city’s Social Welfare Department. All of them are members of the BLU card program, launched in 2002 during the time of Jejomar “Jojo” Binay as mayor, which entitles them to a list of benefits and privileges.

VICTORIOUS. A group of elderly women from barangay San Antonio rejoice upon hearing that the Court of Appeals stops the suspension order of Mayor Binay.

(Here in Makati, the elderly receives cash gifts. We have birthday benefits, we even get cakes. We are exempted from number coding.)

Whistleblowers in the Senate hearing on alleged corrupt activities of the Vice President had accused the Binay family of benefitting from the "overpriced" birthday cakes given to the senior citizens. (READ: Ex-Binay aide: VP, Nancy earned from building, cakes) 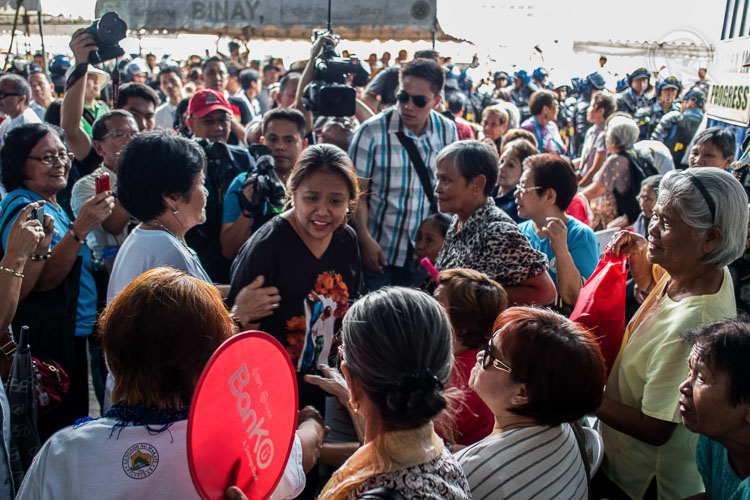 THE OTHER BINAY. Senator Nancy Binay talks to the senior citizen supporters of her brother thanking them for their vigilance.

(Since the Binays took over city hall in 1986, they prioritized the elderly. Until today… Junjun is following his father’s footsteps. We will feel uneasy if Mayor Junjun Binay steps down. If the Vice Mayor takes over as mayor, our benefits might be reduced or removed.)

The Binay camp assured the public that everything in city hall is back to normal. All employees and offices can resume their work, said United Nationalist Alliance (UNA) secretary general JV Bautista.

WAITING. The elderly waits for the gates of the city hall to open. Services had cease to operate normally after the issuance of the suspension order by the Omdudsman.