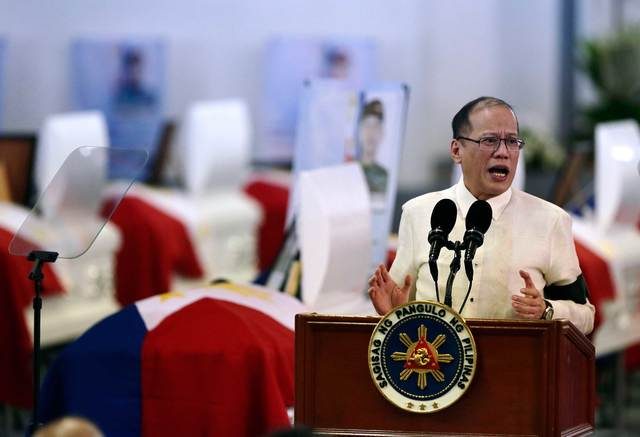 Facebook Twitter Copy URL
Copied
Despite widespread criticism on how he has handled the Mamasapano incident, there are still more Filipinos who want President Benigno Aquino III to stay on

MANILA, Philippines – Even with 8 in 10 Filipinos saying that the government’s explanation over the Mamasapano tragedy is insufficient, more Filipinos don’t want President Benigno Aquino III to resign at this time, a Pulse Asia Research Inc survey revealed Thursday, March 19.

Pulse Asia’s survey results showed that overall, 42% of Filipinos say Aquino should not resign, compared to 29% who say he should step down, while ambivalence over the matter stood at 28%, said Dr Ana Maria Tabunda, Pulse Asia Research Director.

“This is the plurality sentiment among those in Metro Manila (45%), the rest of Luzon (47%), and Class D (43%). Public opinion is split 3-ways in the Visayas, with 36% being ambivalent on the matter, 34% opposing calls for the President’s resignation now, and 29% supporting such calls,” Tabunda said in a statement.

Disagreement over the President’s resignation is strongest in the Balance of Luzon (47%), followed by Metro Manila (45%), Mindanao (39%), and the Visayas (34%).

Some groups have been calling for the President’s resignation over the botched police operation in Mamasapano, Maguindanao, where 67 people were killed – 44 elite cops, 18 Moro Islamic Liberation Front fighters, and 5 civilians.

Both reports concluded, among others, that the President committed lapses in the operation, particularly when he tapped then suspended now resigned Philippine National Police chief Director General Alan Purisima in the planning and execution of Oplan Exodus. The government’s, and in particular Aquino’s, explanation over the incident was deemed “not enough” by 79% of survey respondents, with only 10% saying it is “enough.” The rest (11%) say they are on the fence on whether the explanation was enough or not.

This view was fairly uniform across geographic areas and socioeconomic groupings, Tabunda said.

The survey also revealed that overall, public awareness of the bloody operation led by elite police forces in Mamasapano, Maguindanao, in pursuit of two major terrorists, is “essentially universal,” at 99%, she said.

Respondents were also polled on the controversial non-attendance of the President at the arrival honors for the fallen PNP Special Action Force (SAF) members at Villamor Airbase in January 29.

Pulse Asia said almost 8 out of 10 (79%) Filipinos disagreed with that decision, which was widely criticized particularly in social media.

In the January 25 operation in Mamasapano, 67 Filipinos were killed while the police were in pursuit of terrorists leaders Zulkifli bin Hir alias Marwan and Abdul Basit Usman.

Marwan was killed in the operation, while Usman was able to escape.

The survey was conducted from March 1-7, 2015, via face-to-face interviews, and involved a sample of 1,200 representative adults 18 years old and above.

The survey had a +/- 3% margin of error at the 95% confidence level at the national level results, while results for the various geographic areas have a +/- 6% error margin, Pulse Asia said.

Pulse Asia also said the survey was not commissioned by any party. – Rappler.com