Is the minimum wage enough for a day’s worth of nutritious meals?

Mar 21, 2015 9:00 AM PHT
Jodesz Gavilan
Facebook Twitter Copy URL
Copied
The gap between the food budget and food expenses is evident in the increasing number of families identifying themselves as food-poor 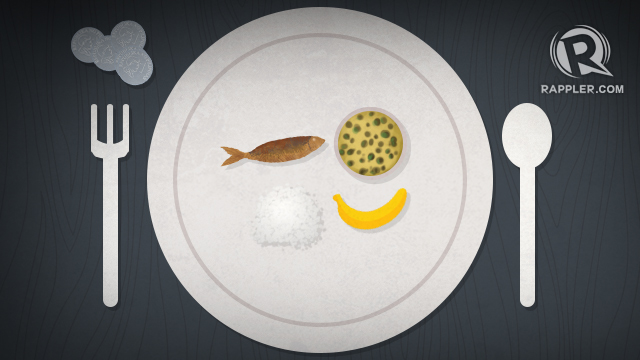 MANILA, Philippines – Starting April 15, workers in the National Capital Region will benefit from a P15 ($.33)* wage hike as approved by the regional wage board of the Department of Labor and Employment (DOLE).

If multiplied with the number of days one is required to work in a month, Metro Manila wage earners will take home P10,582 ($235.95) monthly. (READ: P15 minimum wage hike for Metro Manila workers approved)

However, several labor unions and organizations are not happy with the said increase, saying it’s not enough, considering the price hikes of basic commodities.

Data bank IBON believes that the recent wage hike is “meaningless” as it is less than half of the estimated daily amount of P1,088 ($24.24) needed for a family to meet their basic necessities. The group added that the demanded monthly minimum wage of P16,000 ($356) of workers will only cost companies and firms an average cut in profits of 17.1%.

Meanwhile, All Workers’ Unity (AWU) laments that the approved increase “won’t even pass for alms for workers who have long been struggling to make their scanty wages fit with the rising cost of living.” Their daily expenses include power, education, health, and transport fares.

The latest Family Income and Expenditure Survey (FIES) conducted by the Philippine Statistical Authority (PSA) found that each Filipino household allots 42.8% of its monthly income to food expenses.

Considering the total monthly take home of a minimum wage earner, he has a monthly budget of P4,444 ($99) for food.

Divide this by the number of days in a month and it will show that a family with only one breadwinner will only have a P148 ($3.30) allotment for an entire day’s meals.

Meanwhile, there are currently 19.9% of children under 5 years old who are underweight, while one in every 10 adults lacks the daily energy requirements to function well. (READ: What is the nutritional status of Filipinos?)

All of these problems can be solved if they eat the right amount and type of food each meal but the elephant in the room remains: Is the current daily minimum wage enough for a Filipino family with an average of 5 members to eat right? (READ: Where to find highest number of undernourished children in NCR?)

Based on the food guide developed by the Food and Nutrition Research Institute (FNRI) in 2014 called Pinggang Pinoy, each meal should be composed of one cup of rice, one cup of vegetables, one portion of meat, and one fruit for it to be healthy. (READ: What a ‘Pinggang Pinoy’ should look like’)

The visuals of Pinggang Pinoy feature 4 components which are household staples: malunggay (leaves of horseradish), galunggong (scad fish), a cup of rice, and a banana. By following the guide, a person can be assured of the daily nutritional and energy requirements needed to function effectively.

According to Bantay Presyo, the Department of Trade and Industry (DTI)’s price monitoring scheme, the current prices of the products identified by Pinggang Pinoy as of March 15 are as follows:

If a family wants to aim for healthy members, they should be able to abide by the guides set by the FNRI.

However, it has been found that the budget can be a hindrance. (READ: Patas o Pataas: A look at food price hikes)

Following the food guide, the total whole day’s meals (3 meals) expenses of a family of 5 would be:

A family would have to set aside P439 ($9.78) to be able to eat healthy and right based on the guidelines set by Pinggang Pinoy.

However, a minimum wage worker’s daily food budget of P148 only covers 3.38% of the needed cost to effectively feed 5 mouths thrice a day.

The gap between the food budget and food expenses is evident in the increasing number of families identifying themselves as food-poor.

According to polling firm Social Weather Stations (SWS), there is an average of 41% prevalence of Self-Rated Food-Poor families in 2014. It is 2 points above 2013’s 39%.

With prices of basic commodities continuously increasing as each day passes, workers are left wondering what they can take home to their family, given their minimum wage. – Rappler.com