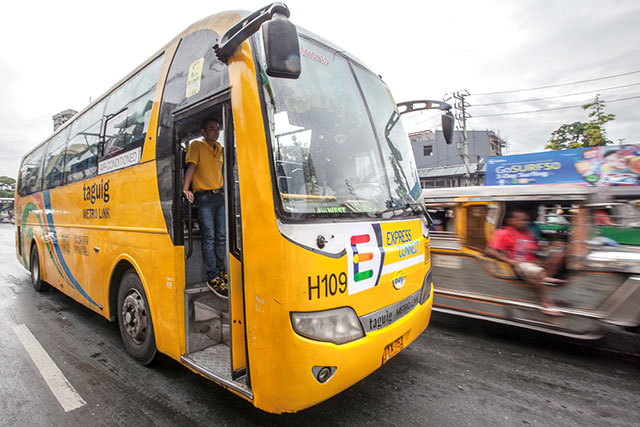 Some of the first passengers of the Express Connect bus service said they were pleased with the comfort and convenience of their bus ride, but it remains to be seen whether it will significantly cut commuters’ travel time.

Fifty buses participated in the initial run of the service, a joint project of the Department of Transportation and Communications (DOTC), the Metropolitan Manila Development Authority (MMDA), and the Land Transportation Franchising and Regulatory Board (LTFRB).

The buses, which currently ply 3 routes – from Quezon City to either the Ayala central business district or SM Mall of Asia in Pasay City – will also be allowed to use the underpasses along EDSA and mixed traffic lanes to speed up travel. 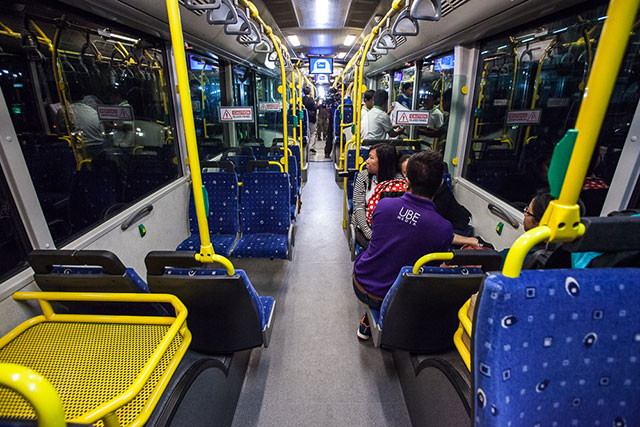 (Our goal is to address the concerns of the public with a more convenient and comfortable way of travel.)

Boarding time was fast, based on this writer’s experience riding an E1 bus, which travels from Fairview to Ayala Avenue, with a stop in Ortigas. Buses are only allowed to pick up passengers if there are still available seats.

The express bus promised to reduce travel time, but rush hour traffic still impeded the speed of the bus.

The most congested part of the trip was the Quezon City circle and along the stops in EDSA. This writer started logging time at 6:13 am, when the bus left the Fairview terminal.

The recorded travel time for an E1 bus from Fairview to Ortigas takes about two hours and 20 minutes based on the timer.

Some passengers though were not aware of the new express service, with government employee Rowena Serocho complaining that the sign boards marking the participating buses were too small.

Ginez promised to improve the information campaign to prevent confusion among passengers.

(There’s still confusion among passengers, they don’t know that there are only limited stops. That’s part of our information campaign within the next few days.)

The buses will operate daily starting from 5 am to 9 pm, the DOTC said.

It will ply these routes:

Passengers can board the buses from the MMDA’s dispatch terminal in Fairview, Quezon City, and at designated terminals.

The DOTC said it will be monitoring the operations of the bus service over the next two months.

Passengers are encouraged to send feedback about their riding experience to expressbus.dotc@gmail.com. – with reports from Katerina Francisco/Rappler.com

Franz Lopez's expertise revolves around creative visual storytelling. Aside from daily news coverage, Franz has been deployed to document natural disasters like the Bohol quake (2013), Typhoon Haiyan (2013), and the Taal Eruption (2020), among others.
More from Franz Lopez 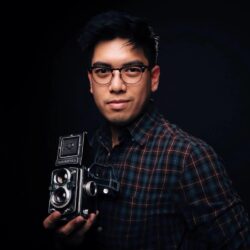