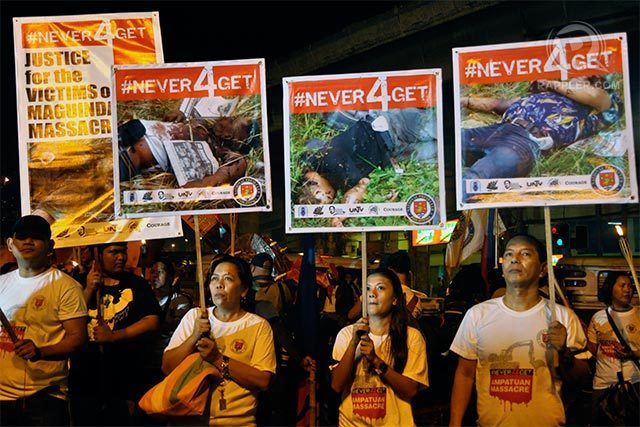 MANILA, Philippines – As the case on the most gruesome election-related crime to be committed in the Philippines in recent years drags on for 5 years, a recurring question is asked: Is there any way for the judiciary to resolve the case faster?

The question was posed to Chief Justice Maria Lourdes Sereno at a business leaders forum on investing in judicial reform in Makati on Thursday, March 26.

In response, Sereno sought to emphasize the magnitude and complexity of the case that involves over 200 individuals accused for the killing of 58 people, including 32 journalists in the town of Ampatuan in Maguindanao. (INFOGRAPHIC: Maguindanao Massacre case, 5 years on)

“Mr Pistorious was tried for over a year and he is only one defender. We have here 272 accused and 87 who have been arraigned. There are 57 petitions for bail. There are more than 400 motions. Our judge has been relieved of all responsibilities other than this case, and (asked to) study this case day in and day out,” Sereno said.

To expedite the case, the Supreme Court has directed Quezon City Regional Trial Court Branch 221 Judge Jocelyn Solis-Reyes to focus specifically on the case and not accept other cases.

Reyes devotes 3 days in a week for trial proper and two other days in resolving motions, Sereno said.

Three assisting judges have also been assigned to her – one to rule on pending motions that are not of substance and two others to help her with pending cases.

The Supreme Court has also issued a directive allowing the judge to issue decisions even without awaiting for the completion of the presentation of evidence.

“I don’t think you can imagine the kind of effort that is required to try this case,” Sereno said. On November 23, 2009, 58 individuals were buried using a backhoe after armed men – allegedly under the orders of then Datu Unsay Mayor Andal Ampatuan Jr – killed them in a bid to stop the wife of his political rival, Esmael Mangudadatu from filing his certificate of candidacy for governor of Maguindanao. Mangudadatu won and is stil holding the post.

It has been regarded as the Philippines’ worst case of election-related violence in recent history and the world’s single deadliest attack against journalists.

The slow pace of the case has not only frustrated families of the victims but has also gathered the attention of the world.

But Sereno said the Supreme Court is doing all it can to accelerate the resolution of the case.

“The circumstances of this horrible killing, the way it was reported, is already mind-boggling in itself but the handling of the trial process is already being expedited at the maximum. I can already assure you that if there is any other way we can expedite it, we will,” Sereno said.

“The judge can immediately rule on any motion without the need of receiving all the evidence. She can have a first in, first out method of disposing of motions. She can convict some ahead of the others, hear some ahead of the others and even move on issues that are elevated to the Supreme Court – she need not wait for the resolution of those petitions. This is already extraordinary. Perhaps we just need to do more by way of informing the international media… and inform them about what we are already doing. I can do nothing more,” Sereno said.

Hearings on the case are being held twice a week in Camp Bagong Diwa in Taguig City, Metro Manila.

On March 17, the Department of Justice started the preliminary investigation for the second batch of suspects in the massacre, comprising of 50 invididuals. – Rappler.com