The chief justice and his wife attended the mass led by Manila auxillary bishop Roderick Pabillo.

The mass started past 9 a.m., shortly after the Monday flag ceremony.

In his sermon, Pabillo said he is not against the impeachment but the judiciary should be respected by the other branches of the government. Black shirts, arm bands and balloons dominated the Supreme Court to symbolize the court employees’ protest against the intervention on the judiciary.

A number of employees displayed plackards and stickers to show their support for the chief justice. 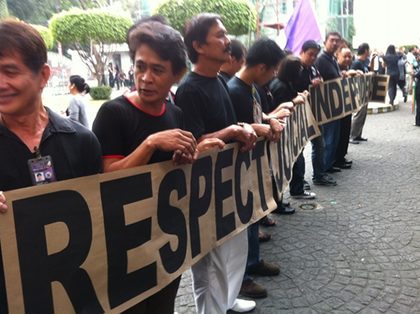 A Supreme Court employee who refused to be named told Rappler the “crowd seemed smaller today” compared to the time when the chief justice addressed them upon learning of his impeachment.

When asked for possible reason, she said that “maybe not all are sympathizing with the CJ (chief justice) just like me.”

She turned back and said that she’s returning to work.

Supreme Court spokesperson Midas Marquez was quoted as saying earlier Monday that despite the observance of the “Black Monday” by the courts, there will be “no work stoppage.”

Workers supposedly can opt to file absence in case they decide not to work today. – Rappler.com