You can now apply for NBI clearance online 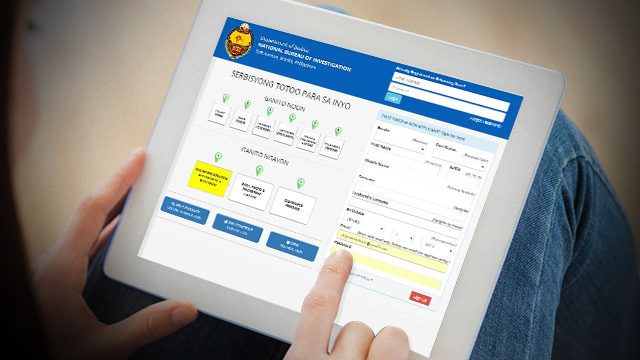 MANILA, Philippines – Starting Wednesday, April 1, the National Bureau of Investigation will no longer entertain walk-ins as it implements a fully online application process for NBI clearance.

“We are rolling out this new procedure to help our brothers and sisters get their clearances fast and in a most convenient way. Almost all of us are using the Internet, we better make use of them in transacting business with the NBI,” said NBI spokesman Nick Suarez said on Monday, March 30.

The registration and appointment system for the NBI clearance will all be done online nationwide. Applicants may accomplish the application form at www.doj.gov.ph/nbi,  www.nbi.gov.ph, and clearance.nbi.gov.ph.

“With the implementation of the new NBI system, we shall continue to roll out and implement solutions to progressively eliminate queues and simplify processes,” Suarez said.

After registering online, applicants may proceed to any of the 55 NBI sites nationwide for the payment and biometric enrollment before their their clearance is released.

“They can only go to the NBI clearance sites on the scheduled date they have chosen when they filled up their forms online,” Suarez said.

When the system had a soft launch last January 2, at least 29 sites nationwide went online.

“The new clearance system provides a more reliable platform for the efficient processing of applicants’ information. With the improved search engine and query database, the accurate releasing of clearances will be faster,” said Justice Secretary Leila de Lima in February.

“This is a first in the history of the [justice] department and of the NBI. Our very own clearance system that was internally developed as part of our flagship National Justice Information System Project,” De Lima said. – Rappler.com

Image of woman using a tablet from Shutterstock