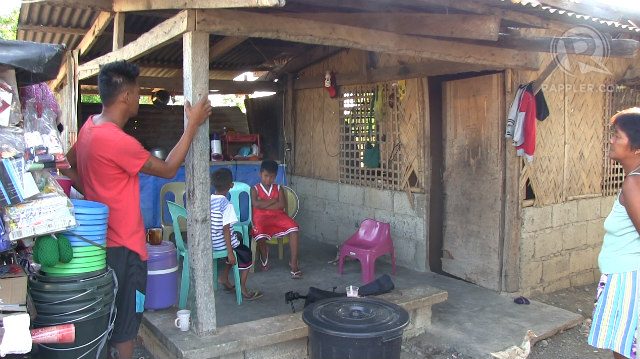 CABANATUAN, Philippines – The father of Mary Jane Fiesta Veloso, a Filipino on Indonesia’s death row, points to their small partly-cemented, partly-wooden house in a farming village in Nueva Ecija province as proof that their daughter is not involved in drug smuggling.

“Kung nag-smuggling ‘yung anak ko, eh di sana may maipapakita na kami ngayon sa buhay,” said Cesar Veloso, Mary Jane’s father, in an interview with Rappler on Monday, March 30. (If my daughter was involved in [drug] smuggling, then we should have material things to show off by now.)

Mary Jane was arrested, tried and sentenced to death in 2010 for attempting to smuggle 2.6 kilograms of heroin into Indonesia. But she only began making headlines in Indonesia in January, after Indonesian President Joko “Jokowi” Widodo rejected her request for clemency. (READ: Fast facts: The case of Mary Jane Veloso)

To Cesar and his wife Celia, the pain is too much to bear.

Both live on the land of their other daughter’s in-laws. Inside their home, there are no electric appliances save for two stand fans. Cesar and Celia’s room is almost just as big as the orange foam they sleep on, which keeps the room’s door from fully opening. The foam is bare, with no linen cover. In one corner of the room is a makeshift altar.

Cesar said that even the former elementary and 1st year high school teachers of Mary Jane would attest to her character.

She never finished high school but was determined as an overseas Filipino worker – at first in Dubai – to ensure a better future for her two kids, Cesar said.

Describing Mary Jane as sweet and loving, Cesar denied that her youngest daughter would be involved in any illegal activity.

It was Mary Jane’s recruiter and godsister (referred to as Cristine or Cristina) who allegedly duped Mary Jane into a fast-tracked job placement in Malaysia and later on dragged her into a drug syndicate operation. (Mary Jane’s parents call Cristine “Tintin.”) A neighbor of Tintin who refused to be named said Tintin left her house with some luggage on Sunday night, March 29. “She might just be vacationing for the Holy Week,” the neighbor said in Filipino.

Mary Jane’s parents couldn’t find the words to describe how hurt they are by Tintin’s alleged betrayal of their daughter, who had trusted Tintin.

Tintin allegedly withdrew the job offer she had promised Mary Jane as soon as Mary Jane arrived in Kuala Lumpur in 2010. She then told Mary Jane that there was another job waiting for her in Yogyakarta, Indonesia.

Tintin made Mary Jane carry the luggage which turned out to have heroin packed in aluminum foil beneath its linings, Cesar said, based on Mary Jane’s narrative during her calls to them over the last 5 years. In a recent television interview, however, Tintin denied knowing the Velosos.

Mary Jane’s mother Celia said they kept silent for the past 5 years but could no longer contain their anger.