A look back: It all started with Gloria

MANILA, Philippines – As the country awaits the start of the impeachment trial of Chief Justice Renato Corona, here is a timeline of events that led to this historic event.

May 10, 2010
The 2010 presidential elections. Sen. Benigno Aquino III of the Liberal Party, a critic of the sitting president, Gloria Macapagal-Arroyo, is the perceived frontrunner.

May 12, 2010
President Arroyo appoints Supreme Court Associate Justice Renato Corona as the High Court’s 23rd Chief Justice. Many criticize this move, since the appointment comes during the consitutional ban on appointments by the President during her last months in office. 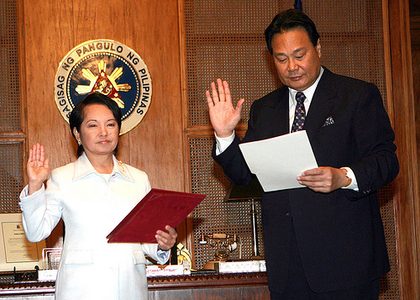 June 30, 2010
Aquino is sworn into office by Associate Justice Carpio-Morales. Chief Justice Corona is in attendance at the ceremonies. Meanwhile, former president Arroyo becomes the representative of the 2nd district of Pampanga.

October 27, 2011
The Department of Justice puts Rep. Arroyo, her husband Jose Miguel on an immigration watchlist, barring them from leaving the country.

November 8, 2011
The Arroyo camp goes to the Supreme Court to appeal the DOJ’s TRO. Rep. Arroyo invoked her constitutional right to travel, and that she will go abroad for medical treatment.

November 15, 2011
The Supreme Court issues a temporary restraining order on the DOJ’s watchlist order against Rep. Arroyo and her husband Jose Miguel. The court sets three conditions for the Arroyos to be able to leave: The payment of a P2M cash bond, appointment of legal representatives, and to report at a Philippine diplomatic post once they are in their destination.

Despite this, the DOJ still barred the couple from leaving the country, creating a ruckus at the Ninoy Aquino International Airport (NAIA) terminal 1.

The following day, Arroyo allies in the House of Representatives ask the SC to enforce the TRO. Meanwhile, the DOJ stands by its decision, and the Solicitor General appeals to the SC to lift TRO.

November 18, 2011
A warrant of arrest is served on Mrs Arroyo, in connection with electoral sabotage charges filed by the Comelec and the DOJ earlier in the day. She receives the warrant during her confinement at the St. Luke’s Medical Center in Taguig City.
https://www.facebook.com/notes/moveph/pasay-judge-based-decision-vs-arroyo-on-3-affidavits/180544505370526
http://www.sunstar.com.ph/manila/local-news/2011/11/18/comelec-files-electoral-sabotage-case-vs-arroyo-191246
http://www.interaksyon.com/article/17590/bedol-ampatuan-abalos-agra-join-arroyo-in-electoral-sabotage-case
http://www.interaksyon.com/article/17586/comelec-files-electoral-sabotage-charges-vs-gma
http://newsinfo.inquirer.net/96265/comelec-files-poll-sabotage-raps-vs-arroyo
http://www.rappler.com/nation/233-pasay-rtc-judge-issues-arrest-warrant-vs-arroyo
http://www.rappler.com/nation/232-text-of-arrest-warrant-vs-arroyo
http://www.rappler.com/index.php/nation/152-the-day-arroyo-was-arrested
http://www.abs-cbnnews.com/video/nation/11/18/11/police-serve-arrest-warrant-against-arroyo
http://newsinfo.inquirer.net/96489/warrant-of-arrest-served-on-arroyo

December 5, 2011
In a speech during the National Criminal Justice Summit and in front of Chief Justice Renato Corona, President Aquino openly criticizes him. The scathing speech fueled rumors of an impeachment plot vs the Chief Justice, to be led by Aquino’s allies in the House of Representatives.

December 13, 2011
Senate receives Articles of Impeachment. The following day, December 14, the Senate convenes as the impeachment court, setting date of start of trial to January 16, 2012.

January 16, 2012
The impeachment trial at the Senate of the Chief Justice commences. – Rappler.com