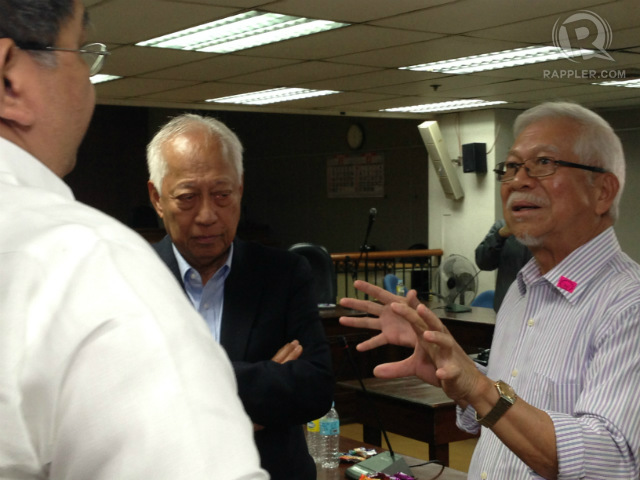 MANILA, Philippines – Critics of the Commission on Elections (Comelec) appeared before poll commissioners on Friday, April 10, to present an alternative to the government’s much-assailed precinct count optical scan (PCOS) machines.

For the first time since he left the Comelec in April 2012, former Commissioner Augusto Lagman sat in the poll body’s session hall in Intramuros, Manila, to propose a “laptop count” for the Philippine elections in May 2016.

In his proposed Transparent and Credible Election System (TCRES), votes will be counted manually on a blackboard – the system the Philippines employed for decades until 2010. At the same time, votes will be encoded in a laptop in the voting precinct. The laptop will be connected to a projector, to allow the public to double-check the votes.

The automation comes in during canvassing in towns and cities.

Lagman said cheating, anyway, “happens in canvassing, not in precincts.”

In his two-hour meeting with Comelec commissioners Friday morning, Lagman suggested the “full replacement of PCOS machines.” He said he doesn’t trust these machines, which the Philippine government bought from the Venezuelan firm Smartmatic in 2012.

Saying PCOS machines can be easily rigged, critics want to blacklist Smartmatic from the Philippine elections in 2016.

When asked if his proposed TCRES can completely eliminate cheating, however, Lagman told reporters: “The system cannot assure that, but the system will improve the accuracy of the manual system. What we’re weighing here is transparency against speed. Using the PCOS, you can see the results immediately, because the counting is instantaneous, except that no one sees how the PCOS counted these. So do we want to sacrifice transparency for speed?”

He added that it’s feasible to implement TCRES in 2016. The software for it, he explained, is almost ready. He said his group wants to try TCRES in the upcoming recall elections and even in school elections.

“They’re receptive to it and we will continue the dialogue,” said Lagman, one of the staunchest critics of then Comelec chair Sixto Brillantes Jr in the 2013 elections.

‘Back to Jurassic Park’

Lagman pointed out that in setting up Friday’s meeting, it helped that Brillantes already retired in February. He said he requested the meeting “after he left.”

Former Comelec Chairman Christian Monsod also attended the meeting. He said he is “listening to the proposals” and hasn’t defined his stance. In any case, Monsod said the accuracy of the election count “is non-negotiable.”

Guia, for his part, said the Comelec heard Lagman’s proposal because “we have to listen to every proposal, every alternative solution, in line with what we want to happen here.” He described the elections as “a shared responsibility of everyone.”

Brillantes, an election lawyer for 25 years before he chaired the Comelec, criticized Lagman’s proposal. He said the manual counting of votes will allow election lawyers, for one, to find more loopholes and delay the process.