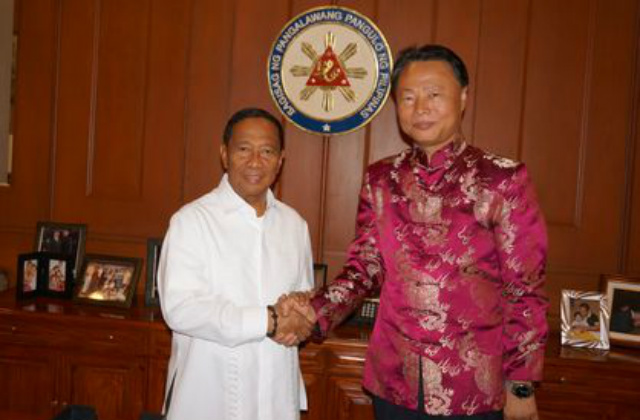 MANILA, Philippines – In a preview of his approach toward China if elected president, Vice President Jejomar Binay stressed China’s economic might as he pushed for bilateral talks between Manila and Beijing over the disputed South China Sea.

His office sent to reporters the transcript of the interview on Tuesday, April 14.

In particular, he called for a “joint venture” between the Philippines and China in developing the natural resources in the South China Sea, parts of which the Philippines calls the West Philippine Sea.

The Vice President – who wants to become Philippine president in 2016 – said he hopes the Philippines can improve its trade relations with China despite the maritime dispute.

Binay made these comments days before President Benigno Aquino III on Tuesday said China’s actions in the South China Sea should spark fear around the world.

On Monday, April 13, the DFA said China’s reclamation activities in the disputed waters have destroyed 300 acres of coral reefs and resulted in around $100 million in economic losses among coastal states.

In contrast to Binay’s personal stance, the Philippines under Aquino has issued more provocative statements against the Asian giant. (READ: Why China prefers Arroyo over Aquino)

Sea row ‘until after death’

The Philippines’ boldest move against China came in January 2013. It filed an arbitration case against China before an arbitral tribunal at the Permanent Court of Arbitration based in The Hague, The Netherlands, to demolish China’s expansive claims over the South China Sea.

Pursuing this case, the Philippines filed a 4,000-page memorial or pleading against China in March 2014, and submitted a 3,000-page supplemental memorial in March 2015.

Manila expects a ruling against China by 2016.

Binay pointed out, however, that China will refuse to heed the arbitral tribunal’s ruling. (READ: Rough seas: Will PH ‘lawfare’ work vs China?)

(The problem with China, sadly, will not be resolved immediately. Perhaps we would have died by many years, and we wouldn’t have resolved the problem.)

In a position close to Binay’s, Filipino-Chinese businessmen earlier said the Philippines should set aside its differences with China to avoid missed opportunities for the Southeast Asian country.

Dr Alfonso Siy, president of the Federation of Filipino-Chinese Chambers of Commerce and Industry Incorporated, said in February: “The Chinese are getting rich and starting to travel. Chinese tourists are very rich and love to spend money so it’s a good opportunity to get more businesses, income, and create jobs.”