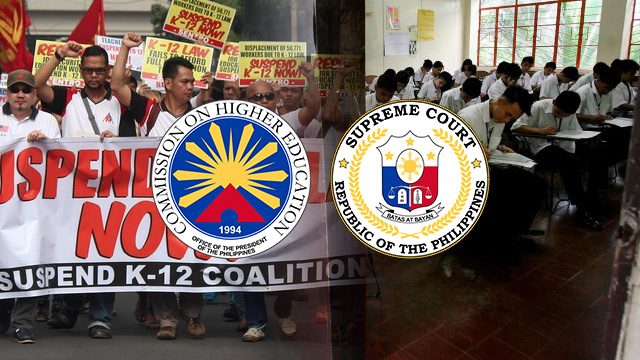 MANILA, Philippines (UPDATED) – The Supreme Court (SC) on Wednesday, April 22 stopped the implementation of a government order that will exclude courses on the national language from the general education (GE) curriculum in colleges.

SC spokesperson Theodore Te made the announcement in a news briefing in Baguio City, where the High Court is holding its summer session.

Te said that the temporary restraining order (TRO) is “effective immediately” and will continue “until further orders from the court.”

He said that the High Court, in a resolution dated April 21, enjoined the respondents “from implementing and enforcing the provision of Commission on Higher Education Memorandum No. 20 series of 2013 insofar as it excluded from the curriculum for college the course Filipino and Panitikan as core courses.”

The SC gave the respondents 10 days from the issuance of the TRO to comment on the petition.

The decision comes just a week after advocates of the Filipino language asked the SC to prevent the CHED from implementing the memorandum, which introduced a new GE curriculum that will be implemented in school year 2018-2019. (READ: Advocates want SC to stop ‘anti-Filipino’ new GE curriculum)

The new GE, however, will not include Filipino subjects and other “remedial courses” as these will be devolved to senior high school – the additional two years added to basic education because of the K to 12 program.

Critics have referred to the memorandum as an “attack against the national language.”