Death of SAF troops ‘murder all the way and around’ 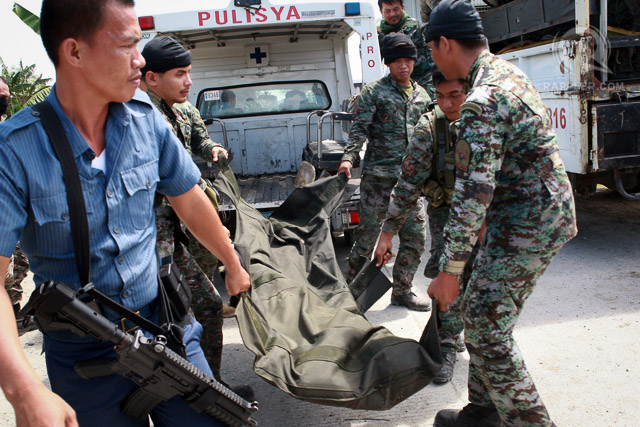 MANILA, Philippines – “Murder all the way and around.”

A Special Investigation Team composed of members of the National Bureau of Investigation (NBI) and the National Prosecution Service (NPS) has recommended the filing of assault complexed with murder and theft charges against 90 individuals over the death of 35 elite cops during a botched police operation in Mamasapano town, Maguindanao, on January 25.

The report was submitted to Justice Secretary Leila De Lima last week but was only made public on Wednesday, April 22.

The 90 fighters, identified by the NBI-NPS team’s eyewitness codenamed “Marathon,” face direct assault complexed with murder or the complex crime of direct assault with murder for their supposed actions on the cornfields of Barangay Tukanalipao on January 25.

The “conspiracy,” the report added, “took the form of the phenomenon pintakasi,” a term used when armed men band together to fight a common threat, regardless of their political and ideological affiliations.

The 55th SAC was the designated as the “blocking force” of the mission, tasked to support the “main force” or the 84th Seaborne Company, which in turn was given the order to neutralize Marwan and Usman.

But in what the PNP’s Board of Inquiry has called a “defective” operation plan, the 55th SAC found themselves trapped in the cornfields of Mamasapano with no cover nor concealment.

Only one member of the 36-member 55th SAC survived the firefight against local armed groups, while the 84th SAC lost 9 of its men.

“Oplan Exodus” claimed the lives of at least 67, according to the PNP BOI – 5 civilians, 18 Moro fighters, and 44 SAF troopers. It’s the bloodiest one-day operation in PNP history and is proving to be the biggest crisis in the Aquino administration.