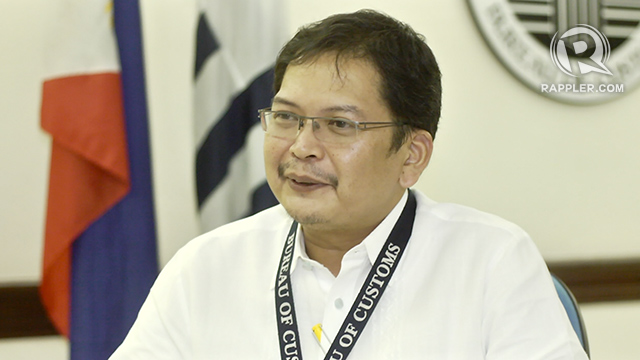 They came from government officials – people asking for favors, political appointments – but Sevilla, who vowed to run the bureau without politics, ignored the requests. Appointments especially, he said, should be the call of the deputy commissioner who would oversee those positions.

“Early on, actually days within I started, there were already lots of pressures for me to move certain people to certain sensitive positions,” Sevilla told Rappler in an exclusive interview on Thursday, April 23, his first since he publicly announced his resignation.

“When it all started it was texts and phone calls. From people I knew within government. None of these were, ‘Do this.’ It was all, ‘Hey you know so and so is counting on this. So and so wants so and so to be placed there.’ But I thought if you give in to one, its a slippery slope.”

His refusal to play along worked. For about a year and 4 months.

“I did not think that anyone outside of Customs or outside of government should have any say in appointments in Customs so I just asked the relevant deputy commissioners,” he said.

But on Wednesday, April 22, Sevilla submitted his resignation to the Office of the President after receiving word that an appointment he opposed is set to go through.

Intellectual Property Rights Division acting chief Teddy Sandy Raval has been pushed “very hard” for an appointed position in the Bureau – for the post of Director of Enforcement and Security Service (ESS), more commonly known as head of the Customs police. The position would oversee the 400 or so armed police force of Customs.

Sevilla had no information on Raval’s qualifications for the post, but the only reason always being given, he said, was that Iglesia ni Cristo (INC) or Church of Christ – a group that has grown to 2.25 million followers – wanted Raval there.

“I said, ‘What is this? Why are we appointing people at the behest supposedly of Iglesia ni Cristo? That just goes against my own principles. Every assurance I made to our own team here at Customs that politics and influence-peddling would have zero role in appointments and promotions in Customs,” he said.

“So I tried to resist that appointment for as long as I could. I learned fairly recently that the appointment is going to come through. I said, ‘Look there is something that is not right about this and I think it is something that’s important enough to the future of Customs and to me personally to take a stand against.’”

On Thursday, with little fanfare and seeming abruptness, Sevilla announced his resignation. There have been rumors since January that he was on his way out. There had been some personal attacks here and there and talk of powers-that-be easing him out, but when Rappler last spoke to Sevilla 3 months ago, he denied he was stepping down.

Did anyone ask him to leave his post this time around?

“I’d rather not answer that,” he said.

Sevilla’s resignation comes just a day after he announced his refusal to have the Bureau used as a fundraiser for the coming elections.

Sevilla, a former finance undersecretary, boasts an Ivy-league education, having graduated from Cornell and Princeton. Prior to joining the Department of Finance, Sevilla was an investment banker. He worked as executive director at investment bank Goldman Sachs, and was associate director and sovereign rater for credit rating agency Standard and Poor’s.

Sevilla has a subdued air about him, and is not one to speak much to media. He works long hours, and does it all again the next day, and is the first to admit that the job is tough – but he sincerely believed, and still does – that reforms in the agency are still possible.

Just not with him at the helm.

Sevilla speaks of a changing atmosphere in the Bureau – one that has become tangibly more political as the country approaches the 2016 presidential elections in May. And because he knows he is not a politically savvy person, he decided to step down.

Even now, he admits he still does not know who is behind all the pressure for the appointments.

The INC is known for its strict rules. Aside from bans against marrying non-INC members, gambling, and excessive drinking, it requires members to vote only the politicians whom their leaders endorse. This is where it gets its political influence – in its powerful bloc voting.

During elections, it has been a tradition for candidates, from the local to the national levels, to make a pilgrimage to INC leaders to secure their support. The INC has also been known to lobby for government posts for members of its church.

Sevilla may have no evidence, aside from what he has been told, that it is the INC indeed pushing for Raval. But in his press conference, Sevilla talked about how, in June 2014, Deputy Commissioner of the Enforcement Group Ariel Nepomuceno, challenged Sevilla’s new process of promotion and appointments – which opened up positions to both insiders and outsiders.

“He (Nepomuceno) said, ‘Officers of ESS are requesting only insiders be considered for senior positions in ESS because it might demoralize people, and there’s a certain chain of command and experience that should be preserved,'” Sevilla said.

“I told him and some senior members of ESS, ‘I don’t agree that we should only promote insiders. We need new blood, we need to be open. Once we start making exceptions, our credibility will be undermined. My promise is a level playing field when it comes to promotions.'”

If Raval does get the appointment, he will report to Nepomuceno who is also reportedly supported by the INC.

Sevilla refuses to name names of who sent him text messages and who called, only saying “people in government.” Asked whether he thinks the pressure comes all the way from the top, he shrugs his shoulders. 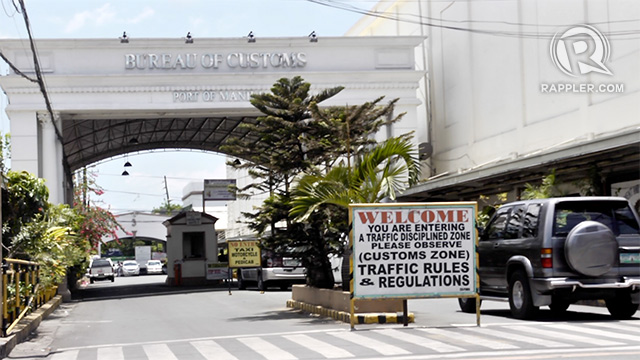 The point is, Raval may soon be appointed by the President – despite Sevilla’s irreverent objection. And while Sevilla concedes this is well under the jurisdiction of President Benigno Aquino III, he simply feels wrong about it, knowing there have been people pushing for Raval to get that post.

“Put it this way. I have my own theories but I won’t talk about what they are. I think the mere principle of a political appointment is wrong in and of itself. And I think it imperils the consistency of merit-based hiring and promotions within Customs that we have been trying so hard to achieve,” he said.

“The fact that elections are just a wee bit more than a year away makes me 10 times more sensitive to these types of considerations.”

Meanwhile, in Malacañang, while Rappler spoke to Sevilla on outside pressures weighing in on Customs, Communications Secretary Herminio Coloma Jr was simultaneously and perhaps ironically telling reporters that “whoever is appointed to the position can expect the full support of the Palace and the Department of Finance.”

During Sevilla’s tenure, he was able to grow the Bureau’s collections by 21% year on year. He made moves toward transparency and efficiency, and filed 30 administrative cases against erring individuals. His entry into the Bureau was trumpeted as the start of reforms in one of the government’s most corrupt agencies.

On social media, netizens expressed surprise and sadness at Sevilla’s departure, but Sevilla is hopeful “they find someone better than me to go forward.”

He admits he could have possibly dealt with political appointments, but simply said it was something he felt the need to take a stand against, adding, “when your conscience bugs you about something you’ve got to listen to it.”

“It didn’t sit well with me. It felt wrong. It felt like something I shouldn’t just let go by,” he added.

“Could I have dealt with it? Yes I could’ve dealt with it. There are ways to deal with it, yes. But I can already sense the environment is changing. I think it’s better for someone who has the skills to navigate in a much more political environment to take over at this point.”

Sevilla said he had already submitted suggested names to the Palace, but did not want to share his list to give the President full discretion.

He did say, however, that the next person would need to have integrity – “given the extent of temptation in a place like this” – an ability to think strategically, and someone who can “navigate a much more political environment without compromising principles and efficiency.”

He said he has also neatly outlined key points for continuity, for his successor.

“One – do we achieve 4-hour processing time by the end of this year? Two – do we achieve paperless processing by next year? I’ve outlined in more detail than anybody wants, for whoever comes after me, what we are trying to do, what we’ve gotten to do – what’s the situation today  – and what would have been my next steps,” he said.

“Now obviously whoever comes in may have ideas of their own. But the next person, I’d like that person to at least have the benefit of the stuff I’ve thought about. Whether she or he wants to continue in that direction, or tweak it, or has better ideas, that’s obviously up to them.”

Despite the evident challenges of the post – one of the “most challenging ones out there,” as he describes it – Sevilla is grateful for having had the opportunity to work as Commissioner.

“I regret absolutely nothing. I regret the fact that I started a lot of stuff and didn’t get to finish it but I have no regrets whatsoever. Serving the people of this country has been the greatest honor of my life and that’s something I will carry with me for the rest of my life,” he said.

And while “it takes a lot out of whoever is sitting here,” he also believes the job is doable, and reforms possible.

For most of the interview, Sevilla spoke with a sense of excitement in his voice, perhaps relieved and almost ecstatic about the decision he finally made, considering that the idea of resignation had been on his mind for quite some time.

He joked about drinking “more beers than I’ve ever drank in my life put together,” now that he has resigned, and how his mother is the happiest person on earth. But his voice dropped when asked what he wants people to know about Customs, following his departure.

“I think what’s important to know is that this effort has been a huge team effort. I’ve been the face of it just because we’re a culture that’s very personal but behind me have been hundreds, maybe thousands, of brave, risk-taking men and women who, despite the fact that they know they work for the most hated government agency out there, take risks and make sacrifices every day. And those people are still there,” he said.

“So there’s no reason to despair. But it’s going to be tough. It’s a tough situation but the elements of success are all there. I could pull out my phone right now and show you texts that would make you cry. I’m not talking about reactions to my departure. I’m talking about texts that have come through in the last 14 months by people telling me, ‘You know. We seized this. And my wife got visited by armed people she doesn’t know at her house.’”

He paused, “That’s the kind of sacrifice I’m talking about. Made by people who are still there.” – Rappler.com