Why China chose Arroyo over Aquino Editor’s Note: This story was originally published on July 24, 2012. Rappler is republishing this piece in time for Chinese President Xi Jinping’s trip to the Philippines this month. Follow Rappler’s special coverage of Xi’s state visit to the Philippines.

MANILA, Philippines (UPDATED) – If China became increasingly aggressive in defending its territorial claims in 2012, it was partly because of the change of Philippine presidents, an international think tank said.

“The previous administration of Gloria Macapagal Arroyo had been considerably more receptive to Beijing’s commercial incentives and was apparently willing to compromise Philippine claims in response,” the ICG said in its report.

“China sees the Aquino government’s stronger stance as provocative, and has responded by increasing its presence in disputed areas,” the think tank added.

ICG’s report was the second in a series, the first of which discussed how China’s internal politics affected the Philippines-China dispute over Scarborough Shoal.

The ICG noted the Joint Marine Seismic Undertaking (JMSU), which the Arroyo administration entered into with China as well as Vietnam. Under the JMSU, the 3 countries agreed, through their national oil corporations, to conduct joint explorations of the disputed South China Sea.

Up to 80% of the JMSU site is within the Philippines’ exclusive economic zone, the area 200 nautical miles from the country’s baselines or edges within which it has the sovereign rights to explore and exploit, and conserve and manage natural resources. But in a Newsbreak report in 2008, legal experts said then that the government “effectively derogated the Philippines’ sovereignty over the marine resources around the province of Palawan.”

“In return for allowing China (and later Vietnam) to operate within Philippine waters as an equal, Ms Arroyo, compared to past presidents, clinched the most number of bilateral agreements with China in the two countries’ 30-year relationship,” Newsbreak reported in the story, “Arroyo Gov’t Pleasing China since Day 1.”

Arroyo also allegedly used her presidency to push for the bid of a Chinese firm, ZTE Inc, for a controversial broadband project. She faced two counts of graft, as well as an ethical charge, over this.

“Critics of President Arroyo alleged she had agreed to trade Philippine territory for Chinese development assistance and filed a case in the Supreme Court challenging the constitutionality of the JMSU,” the ICG noted. The JMSU expired in 2008, and the Philippines explored the South China Sea on its own for hydrocarbon. China, for its part, increased its vessels’ presence in the surroundings of the Paracel and Spratly Islands, the ICG said.

In March 2011, this sparked a standoff between the Philippines and China over a Philippine vessel conducting a seismic survey in Reed Bank, an area rich in natural gas.

The ICG said Aquino, for his part, “sought to undo the damage caused by his predecessor’s accession to the failed Joint Marine Seismic Undertaking, which he believes encouraged greater Chinese forcefulness.”

“The former government could be bought; the current government cannot,” said an ICG correspondence with a source it did not name. “The Chinese are likely playing a waiting game, hoping that the government will eventually be out of power and a new government will enable them to return to their tried and true tactics.” Indeed, in his 2011 State of the Nation Address (SONA), Aquino did not mince words against China over Reed Bank, or what is locally known as Recto Bank.

“Speaking of security, does enhanced security not also enhance our national pride? There was a time when we couldn’t appropriately respond to threats in our own backyard. Now, our message to the world is clear: What is ours is ours; setting foot on Recto Bank is no different from setting foot on Recto Avenue,” the President said.

In the standoff in Scarborough Shoal, Aquino initially drummed up international support against China, agitating the Chinese who detest 3rd-party involvement in territorial issues.

Later, he seemed to mellow his tone, in an effort to show “goodwill” to China. He said the Philippines will stop requesting international support in the meantime. 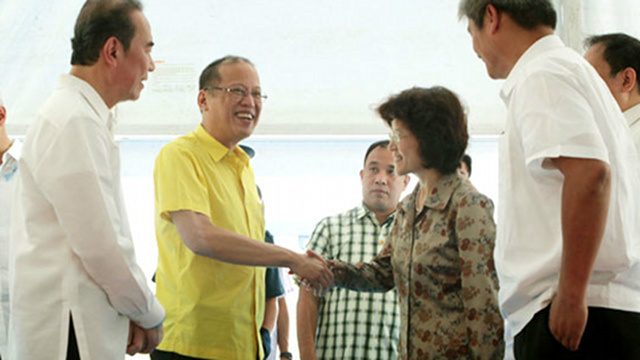 In his SONA on July 23, 2012, Aquino did not explicitly call for international attention, but asked for “solidarity from our people” regarding the issue of Scarborough Shoal, whose official Philippine name is Bajo de Masinloc.

“There are those who say that we should let Bajo de Masinloc go; we should avoid the trouble. But if someone entered your yard and told you he owned it, would you agree? Would it be right to give away that which is rightfully ours?”

In its report, the ICG said the South China Sea dispute between China and the Philippines – as well as Vietnam, Malaysia, and Brunei – “has reached an impasse.” “While the likelihood of major conflict remains low, all of the trends are in the wrong direction, and prospects of resolution are diminishing,” the ICG said. (Read the report through the PDF below.)

The group then suggested the joint management of resources in the disputed areas, similar to China’s long-standing proposal.

“Small thinking is to quarrel over a few pieces of rock in the middle of a big sea in the hope of finding oil to take out and use up for the present needs of a single country. Big thinking is that instead of fighting like children over a piece of candy, let us bring the debate to an altogether different plane,” Oposa said. – Rappler.com