Comelec scraps use of touchscreen voting in 2016 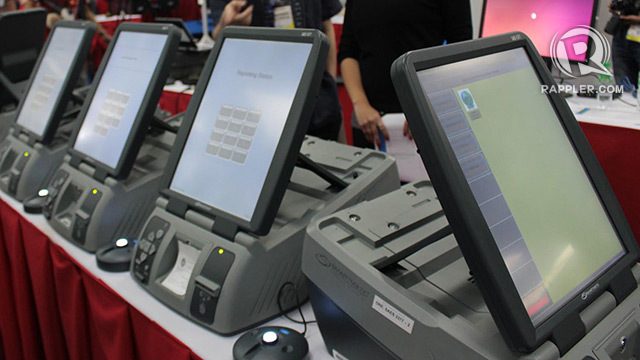 MANILA, Philippines – The Commission on Elections (Comelec) has decided to scrap the use of direct-recording electronic (DRE) voting machines – which use touchscreen technology – for the 2016 national and local elections.

In a memorandum dated April 21, acting Comelec Chairman Christian Robert Lim said that despite the value of trying out the technology and its potential to “revolutionize Philippine elections,” present circumstances convinced him that it would be an “unnecessary hurdle to the already daunting task” of conducting the 2016 polls.

The Comelec originally planned to try the use of 410 DRE voting machines in the municipality of Pateros in Metro Manila. It was chosen as the pilot area due to its proximity to the city of Manila and its relatively small urban voter population. As of August 2013, Pateros has 34,847 registered voters.

However, while admitting that the recommendation of the Comelec Advisory Council (CAC) to use DRE technology was forward-thinking and sensible, Lim said that the poll body took note of the apprehensions by some members of the joint congressional oversight committee on the automated election system (JCOC-AES).

“Political pressure has been exerted by the JCOC to dispense with the use of DRE technology” for the 2016 polls, Lim added. “The commission does not require additional complication in its preparations for the 2016 national and local elections.”

Moreover, Lim argued that pilot testing any innovation to the current election system during presidential elections “might not be the most prudent course of action.”

Technology provider Smartmatic-Total Information Management (TIM) Corporation was the only bidder that passed the first stage of the bidding in December 2014.

But it was disqualified in the second stage by the Comelec bids and awards committee in February 2015 for submitting a “non-responsive” financial proposal.

In early April, the Comelec suspended the public bidding for DRE machines altogether, pending studies to address concerns regarding the touchscreen voting technology.

In the memorandum, Lim also noted that the costs of pushing through with the DRE project outweigh the benefits. “The prospect of utilizing DRE technology offers much but not enough,” he said.

He explained that touchscreen voting through DRE machines would significantly diminish voter queueing outside polling precincts. It also does not require paper ballots.

DRE machines, said Lim, are generally recognized for their user-friendly features, which would improve accessibility to the election system.

But, on the other hand, he noted that a couple of DRE machines would have to be deployed in each clustered precinct, thus translating to larger costs.

In addition, Lim said that the introduction of DRE machines into the current system would cause integration issues. Unfamiliarity to it would extend to stakeholders such as election partners and the voters themselves.

For instance, the board of election inspectors manning the polling precincts on election day would have to read a separate set of general instruction and training modules for the DRE machines.

The current automated election system features precinct count optical scan or PCOS machines, which use optical mark reader (OMR) technology. Ballots shaded by voters would be fed into the machine, which would scan and count the marks on the ballots, and transmit results to Comelec servers. – Rappler.com