Jul 25, 2012 8:27 AM PHT
Facebook Twitter Copy URL
Copied
(2nd UPDATE) But she's covered by a hold departure order issued by the Sandiganbayan on July 24 in connection with a plunder case 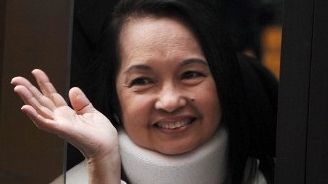 “The court believes that the prosecution failed to establish with the required quantum of proof, that conspiracy exists on the part of accused Arroyo,” said the court’s bail order, which was released to the media. “Accordingly, accused Gloria Macapagal Arroyo is allowed to post bail for her provisional liberty in the amount of one million pesos.”

However the court said she could not leave the country.

Arroyo was charged with “electoral sabotage”, a crime punishable with life in jail, for allegedly conspiring with a feared political warlord to rig the 2007 senatorial elections.

Based on the Rules of Court, this means the prosecution – in this case the Commission on Elections – does not have strong evidence of guilt against Mrs Arroyo in her electoral sabotage case.

The case against Mrs Arroyo has been criticized as weak, with defense lawyers pointing out the star witness, Norie Unas, does not have personal knowledge of Mrs Arroyo’s alleged crime.

In his testimony, Unas said Mrs Arroyo instructed his former superior, former Maguindanao Gov Andal Ampatuan Sr, to rig the 2007 elections. He allegedly heard the former President instruct Ampatuan: “Dapat 12-0 sa Maguindanao, kahit pa ayusin o palitan ninyo ang resulta.” (It should be 12-0 in Maguindanao in favor of the administration, even if you have to manipulate the results.)

During his cross-examination, Unas admitted he did not actually witness the alleged poll fraud in 2007. “I have not seen how they did it but I know they are doing it,” he said. Mrs Arroyo, however, faces a plunder case before the Sandiganbayan, a non-bailable offense. It’s the same case that put former President Joseph Estrada in jail.

On Tuesday, July 24, the anti-graft court issued a hold departure order against her. But it has yet to issue a warrant of arrest against Mrs Arroyo. Her lawyers earlier asked the court not to issue one pending their appeal of the plunder case.

In an interview on ANC, the ABS-CBN News Channel, Comelec chair Sixto Brillantes downplayed the bail ruling’s effect on the former President’s case. “We stil have to go through the trial on the merits of the case. This is just the bail hearing,” Brillantes said.

He said this can be a “good lesson” that Comelec still needs to firm up or present additional evidence on the case.

Mrs Arroyo still faces graft charges before the Sandiganbayan over the botched NBN-ZTE deal. She has posted bail for this case. – with reports from Agence France-Presse/Rappler.com