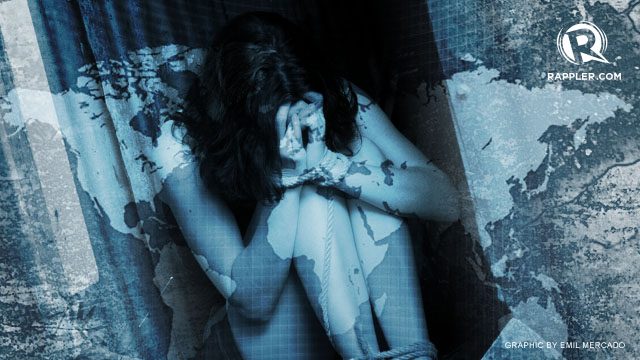 Facebook Twitter Copy URL
Copied
Human trafficking convictions increase under the administration of President Benigno Aquino III, but the number of convictions 'remained low compared to the size of the problem'

MANILA, Philippines – For almost a month in mid-2005, a then 23-year-old Abbie* was “forced to work” every night as a prostitute in a bar in Malaysia.

At least one and at most 5 men in one evening paid the bar to have intercourse with her.

Abbie was illegally recruited and trafficked by syndicates, at least two of whom have been convicted.

A local court handed down the guilty verdict on November 29, 2005 that was later on appealed but affirmed by higher courts.

That same year, government prosecutors were able to secure convictions of 4 other human traffickers in other cases.

The convicts were found guilty under the Anti-Trafficking in Persons Act of 2003 or Republic Act (RA) No 9208, a legislative rarity in Asia at the time.

It has been 12 years since the signing into law of RA 9208, a legislation meant to “promote human dignity,” “mitigate pressures for involuntary migration and servitude of persons,” and “ensure their recovery, rehabilitation and reintegration into the mainstream of society,” among others.

How has the government fared thus far in securing convictions under the said law and upholding its spirit?

IACAT data: Convictions up under Aquino

Data from the Inter-Agency Council Against Trafficking (IACAT) show that convictions on the basis of RA 9208 increased under the administration of President Benigno Aquino III.

Some 29 case convictions under RA 9208 were secured by government prosecutors from 2005 to June 2010, under the presidency of Aquino’s predecessor now detained Pampanga Representative Gloria Macapagal-Arroyo.

It was during Arroyo’s presidency that RA 9208 was enacted.

Based on data from IACAT, the following number of human trafficking convictions were secured from 2005 up until Aquino took his oath of office in June 2010:

On the other hand, government prosecutors under the Aquino administration were able to secure 153 human trafficking case convictions consisting of 174 convicted traffickers punished mostly with life imprisonment and corresponding fines.

This is more than 5 times the number of convictions during a similar 6-year period under Arroyo.

As of March 27, 2015, the following number of convictions on the basis of RA 9208 have been secured during Aquino’s term:

Small compared to the problem

Still, the 2014 Trafficking in Persons Report by the United States (US) State Department said the Philippines’ “overall number of convictions remained low compared to the size of the problem.”

“During the year, the government obtained a conviction in 8 months, the fastest a trafficking conviction has ever been achieved in the Philippines,” it added.

The case disposal rates in human trafficking cases by trial courts also point to a larger problem in the Philippine judiciary – the clogging of court dockets.

In the Philippines, state figures from 2005-2010 show lower courts were confronted with an annual average caseload of more than one million – equivalent to an average of around 4,221 cases per working day.

While speedier trials through a continuous trial system were recommended in the 2014 Trafficking in Persons (TIP) Report, the Philippine government has yet to yield to repeated calls from no less than Chief Justice Maria Lourdes Sereno for greater funding of the judiciary for this purpose.

The Philippine judiciary has since piloted the continuous trial system, which Sereno referred to as a “revolutionary” “game-changer” in the case disposal rates of trial courts. (READ: Sereno wants more funds for faster case disposal)

Sereno wants to ease the heavy volume of caseload of trial courts through an automated system that manages cases from filing to judgment. The use of court technology in case management is among her reform priorities in her term as the High Court’s chief.

Reacting to the TIP Report, Deputy Presidential Spokesperson Abigail Valte had pointed to a need for faster processes in the judiciary: “We continually encourage our counterpart in the judiciary to cut down on the lengthy trial processes so that witnesses don’t have to wait too long. The executive department supports the judiciary to hasten trials.”

Sereno, however, has been vocal about the need for the national government to increase funding for the courts to sustain the continuous trial system. (READ: SC: Efficient courts vital to ASEAN integration)

Also during Aquino’s term, Republic Act No. 10364 or the “Expanded Anti-Trafficking in Persons Act of 2012 was signed into law. The legislation adds the following acts to the list of criminal acts that promote human trafficking:

Expanded Anti-Trafficking in Persons Act of 2012

The Philippines also included human trafficking among the predicate crimes of money laundering, which makes it easier for the state to go after the profits gained from the smuggling of human persons.

Since human trafficking is considered a predicate crime of money laundering, the Anti-Money Laundering Council, the country’s financial intelligence unit, may be allowed by a court order to look into monetary instruments suspected to be linked to the illegal activity.

A suspected human traffickers’ assets can also be frozen upon order of the Court of Appeals, which grants bank inquiry applications of the AMLC. This allows the council to probe and trace the movement of dirty money.

The US’ 2014 TIP Report had recommended that the Philippine government “implement the anti-money laundering act in cases of trafficking and provide victims compensation through seized assets.”

*The story of Abbie (not her real name) is based on a court document.